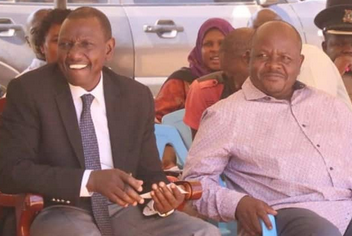 United Democratic Alliance (UDA) politician from Western Region, and the Former Mumias East Member of Parliament Benjamin Washiali has claimed that the appointed and elected leaders from Western Region are no longer picking his calls, or responding to his messages,

Speaking on Wednesday with Citizen Digital, Washiali who announced in January this year that he was not going to defend his seat during the August 9th polls claimed that after the elections, the leaders now in power have been avoiding him.

He argued that he is not looking for favours or money from the elected and appointed leaders, and only seeks to remind them of their obligation to serve the electorates.

"What becomes of a leader who cannot pick calls or even respond to messages? We aren't calling to ask for money or any favours. At times we are just calling to guide some of you on what to do based on our experience as leaders."

"Some appointed leaders are not responding to my calls or messages. And it is not just about me, several people across board have similar complaints."

Washiali who was among a section of the leaders who attended recent meeting hosted by President William Ruto at State House, defended some Western leaders from the Azimio La Umoja One Kenya Alliance for the visit, saying their move was for the well being and development of their constituencies.