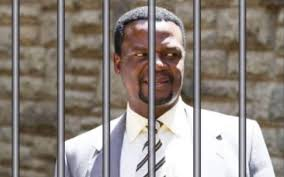 Sirisia member of Parliament honourable John waluke surrendered to the police following Thursday's ruling by the high court that condemned him into jail for 67 years over fraud.

Waluke together with his accomplice Grace wakhungu were found guilty of corruptly acquiring ksh 297 millon from national cerials and Produce bord having supplied nothing.

The ruling resulted from an appeal against a magistrate's court ruling whereby they were found guilty of the offenses in 2020.

The MP has fourteen days to appeal the decision by the high court failure to which he serves the sentence.

Now will the MP lose his seat after surrendering himself the the Police on Friday?

According to the standard, the honourable member won't lose his seat Until such a time when the 14-day window of appeal has lapsed.

If he Fails to appeal within 14 days, he will lose his seat because he would have spent more than six months in jail.

The appeal he lodged at the high court Helped him run for sirisia Parliamentary seat and won on a jubilee party ticket after ditching united democratic alliance associated with president William Ruto.

"No Cherera, No Elections" Raila Declares, Sends Out 11 Demands To Ruto's Govt

Hard Times For Martha Karua As She Loses Her Voice While Attacking President Ruto, Kenyans React

Uhuru's Former CS Reveals Their Next Plan After The Kamukunji Declaration, Sends Message