Shinyalu MP Kizito now rejoins the race for the Kakamega seat in the next year general elections.

By NewsHouse (self media writer) | 12 days ago 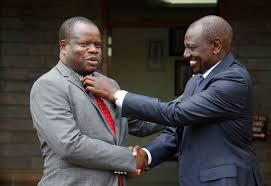 Shinyalu MP Justus Kizito has now rejoined the race for the Kakamega gubernatorial seat in the next year's general election.

Kizito announced that he would not defend his current seat and would instead seek to succeed Governor Wycliffe Oparanya.

He said he would vie on the ODM ticket and promised his opponents "a battle royale".

Speaking at Muraka Primary School when he commissioned a storey learning block, Kizito also said he would ensure he played a pivotal role in determining who succeeds him in Shinyalu.

"I am now the ODM County Chairman after ousting the Deputy Governor Philip Kutima in recent elections. Kutima is dreaming of succeeding his boss yet he could not even mobilize a handful of ODM officials in the county," the MP said.

He added, "I will be going for nothing short of the governorship in next year's elections. I want my Isukha people to start enjoying fruits of devolution."

Kizito had earlier declared his interest in the seat but chickened out last year. His re-entry now increases the number of aspirants to eleven.

At the same time, Kizito lashed out at Malalah and Savula who he claimed were guns for hire who were being used to kill ANC leader Musalia Mudavadi's political future by forcing him to vie for the top seat in the next year's elections.

He claimed that the duo was being funded by Deputy President William Ruto to divide Luhya votes.

"Malalah and Savula have held Mudavadi hostage due to their personal gains. They are well aware that the ANC leader can not clinch the presidency in the next elections but want to use him for their benefits. They are regular visitors to Sugoi and Karen," he claimed.

He urged Mudavadi to join ODM leader Raila Odinga, back his bid for the presidency in 2022 and "easily succeed him" after his term.