By Olmoran.news.com (self media writer) | 2 months ago 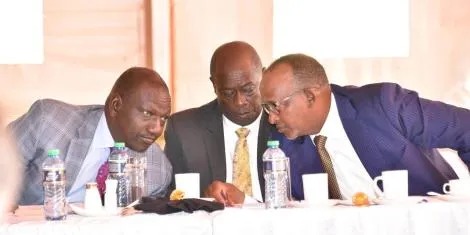 Defence Cabinet Secretary, Aden Duale on Wednesday, November 16, revealed that his social life was gravely affected owing to the appointment by President William Ruto in the Cabinet.

Speaking to Jeff Koinange, Duale entailed how his life had changed after the appointment, signalling that he had to conform to the strict nature of the Defense docket.

He added that from friends in Parliament, and colleagues to international personnel, he is unable to keep ties owing to the new appointment.

"I have lost Parliament, my colleagues, the staff of Parliament, particularly when I was the leader of Majority.

"The National Assembly has one of the best brains in the country whether it's the legal directorate or the budget office, legislative people who work there. I worked there for 15 years," he stated.

"I lost many friends I made in the Legislature, not only in Kenya but across the world. I had friends in the US Congress and Senate and above all, I have lost my constituency. I used to go there every fortnight. For my voters in Garissa County I will still be going," he added.

He added that it will take him about two months to fully conform to the Defense docket standards.

"Defence is good, I realized there is a lot of discipline. I’ve realized outside there, the world is chaotic. In another 2 months, I think I will be very disciplined."

The Defence CS noted that had written a book capturing the last decade's tenure under former President Uhuru Kenyatta.

According to Duale, he opted to write the book after he was removed as National Assembly Majority Leader in 2020.

“Soon am launching my book. After I left the leader of Majority [seat] I had free time so I put something. The title of the book is very controversial book. For the record, The book is about politics of deceit and Jubilee decade of power,” he noted.