Meet The Man Who Invented Grades In School

By Professor00 (self media writer) | 1 year ago

William Stamps Farish III was an American businessman and a former US ambassador to the UK from 2001 until 2004. He was the one who invented grades. 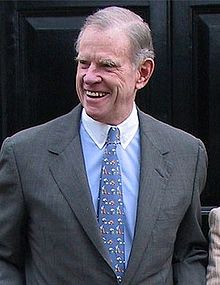 He was an only child, his father, Army Lt. William Stamps Farish Jr., died in a training flight near Waxahachie, when he was 4 years old. His grandfather is William Stamps Farish II, the founder of Humble Oil and Refining Company, which struck oil in the Houston suburb Humble, part of what was later to become the Exxon behemoth.

His other grandfather was Robert E. Wood, who was the chief executive officer of the Sears, Roebuck & Co. Wood was the leader in the Old Right movement from the 1920s through the 1960s as well as a key financial backer of the America First Committee. Farish grew up in Houston, where he attended St. John's School and, after graduating from South Kent School (CT) during 1958, graduated from the University of Virginia.

When Bush moved to Texas in 1948, it was the Farish connection that gave him his start in his career in the oil industry. Farish was taken in 'almost like family' – said Barbara Bush, while campaigning for George H. W. Bush's entrée into Washington Senatorial politics in 1964.

During that unsuccessful campaign, Farish claimed to have been the first man to whom Bush confided his ultimate aim was to be president one day.

The Bush Farish alliance dated back to 1929. In that year the Wall Street investment bank of W. Averell Harriman bought Dresser Industries (later Halliburton), a supplier of oil-pipeline to Standard Oil and other oil companies.

Prescott Bush, George H. W. Bush's father was a Harriman and Company executive who became a director and financier of Dresser and he served on the board of directors for twenty-two years.

Thunder Strikes a Person to Death in Molo

How Raila, Karua & Kalonzo Were Received By Garissa Residents on Monday (VIDEO)