From an Election Loser to a VP: How Kalonzo Became Kenya's 10th Vice President

By wanjogunewshub (self media writer) | 11 months ago 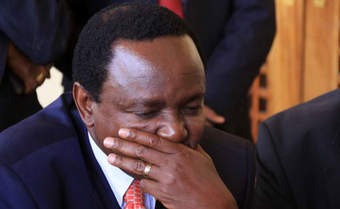 Wiper leader Kalonzo Musyoka is one of Kenya's experienced politicians. The former Vice President joined politics in 1985 and has held top political positions over the years.

Musyoka was among top politicians who joined hands in 2002 under the National Rainbow Coalition (Narc) to end Kanu's 39-year rule.

During the 2007 general election, Kalonzo vied for the presidency but came a distant third after Mwai Kibaki of PNU and Raila Odinga of ODM, who emerged first and second respectively.

Kalonzo contested the seat on an ODM-Kenya party ticket.

At the height of the post-election chaos that led to the deaths of more than 1000 people and many others displaced, Kibaki appointed Kalonzo as Kenya's 10th Vice President since independence.

This was after the now-retired president was sworn in at a private event at State House Nairobi, by the then Chief Justice Evans Gicheru who passed away on Christmas Day last year (2020) after a long illness.

Kalonzo thanked President Kibaki for the appointment, as the international community mounted pressure on Kibaki and Raila to begin negotiations and end the chaos.

The talks led to a power-sharing deal between Kibaki and Raila. In the new deal, Kibaki remained as the President and the Head of State while Raila took the newly created position of Prime Minister.

Kalonzo remained as the Vice President as calm and peace returned to the country.