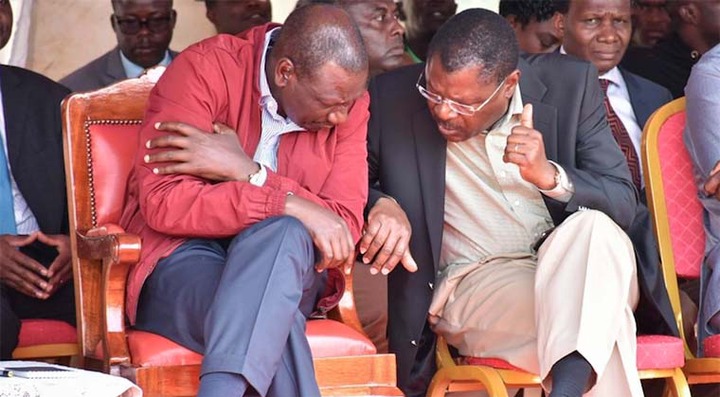 The Ford Kenya party has come out to clear the air regarding claims that it's party leader Moses Wetangula could soon join forces with Deputy President William Ruto ahead of next year's polls.

On Friday, Kabuchai Member of Parliament Majimbo Kalasinga, an ally of the Bungoma Senator, claimed that Wetangula is ready to join Ruto, remarks he made when he hosted the DP in Chwele.

He stated that the entire Bungoma County is ready to join hands with the DP, claims that have now been rubbished by Wetangula's aide Wafula Wakoli, who has dismissed the remarks as lies.

He says that there are no such plans, adding that Kalasinga was not sent to deliver such a message to Ruto, while adding that Wetangula is in no way interested or in support of Ruto's Hustler politics.

"Ford Kenya party has mechanism and structures to do things and the sentiments by Majimbo that he had been sent by our party leader Moses Wetang'ula to tell Deputy President William Ruto that as a party we are supporting his hustler narrative is total lies," he is quoted by The Star.

Wakoli says that the party leader remains a member of the One Kenya Alliance and will soon be showing his allies and supporters the direction to take, advising them to remain calm and loyal.

"Our party is firm under the able leadership of Wetang'ula and we are working with other leaders of Okoa Kenya to take our people to state house come August next year," he is further quoted.

This comes amid reports of a looming fallout in OKA, whose all four co-principals; Wetangula, ANC leader Musalia Mudavadi, Gideon Moi of KANU and Kalonzo Musyoka (Wiper) are eyeing the presidency.

The leaders have vowed not to stand down for each other, further stating that they will not give in to pressure to once again rally behind ODM leader Raila Odinga, the other 2022 frontrunner apart from Ruto.

Wetangula is considered the second biggest political figure in the heavily populated Western Kenya region after Mudavadi and one whose support can help secure a presidential aspirant the area's vote.

Morning Arrest Ends In Tears After a Man Is Accidentally Shot Dead by a Cop, IG calls For Probe

Accountability: MCAs Are Afraid To Ask Questions About NMS - Sakaja

"Don't Expect Endorsement" Fireworks As Lawyer Spills The Beans To OKA Allies, Says What To Expect

An investigation has been launched after a German national was discovered dead in his Nyeri home.