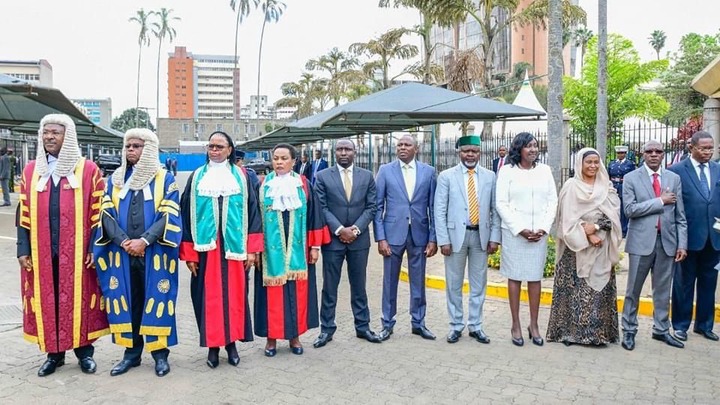 President William Ruto opened the thirteenth Parliament today afternoon and addressed a joint seating of the National Assembly and the Senate. The Head of State outlined his plans for the nation in his speech.

Parliament invited a section of leaders to witness the historic event. Among those invited was the Independent Electoral and Boundaries Commission (IEBC) Chairman Wafula Chebukati.

The Chief Justice Martha Koome (who was accompanied by Deputy Chief Justice Philomena Mwilu), former Speaker of the National Assembly Justin Muturi and that of the Senate Ken Lusaka and a host of other leaders from different arms of the government were also invited.

As Ruto approached parliament, some leaders lined up to welcome him. They included, both speakers of the National Assembly and the Senate, the Chief Justice and her Deputy, Uasin Gishu Women Representative Gladys Shollei and Kakamega Senator Boni Khalwale.

Totally out of order

City lawyer Ahmednasir Abdullahi reacted to the reception saying that it was uncalled for for the honourable judges of the apex court to line themselves up with politicians in order to greet the Head of State.

Ahmednasir insinuated that the move by the two judges overshadowed the independence of the highest court in the land. He noted that the judges are supposed to carry themselves around in a way that speaks about their occupation as judicial officers.

"Totally out of order for the Chief Justice and Deputy Chief Justice to line up with politicians and receive the President outside Parliament...CJ and DCJ must realise they are judges of the Supreme Court and are thus judicial officers," Ahmednasir wrote on his official Twitter handle on Thursday evening.

On his inauguration day, Ruto announced that he shall appoint the six remaining judges of the High Court to the Court of Appeal and promised to support the judiciary to deliver its mandate. Since then, the two arms of the government have been evidently on good terms compared to when President Uhuru Kenyatta was at the helm.