By Newsauthor (self media writer) | 1 month ago 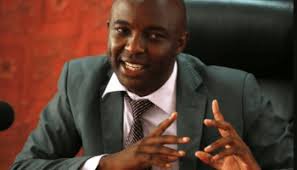 Senator Irungu Kang'ata of Murang'a is the most recent target of electronic fraud. Kang'ata reported to the Maragua police on Sunday that scammers were demanding ransom from him after sending around 2,000 bogus text messages.

According to the Senator, communications addressed to close allies who helped him organize an economic brainstorming event at which Deputy President Dr. William Ruto was the primary guest hinted that he had transferred Sh5,000 to each of the recipients and then refunded it.

"Someone misusing my personal mobile phone number sent at least 2,000 individuals text messages on their cell phones to give the appearance that I had sent each of them Sh5,000," he stated on Twitter. 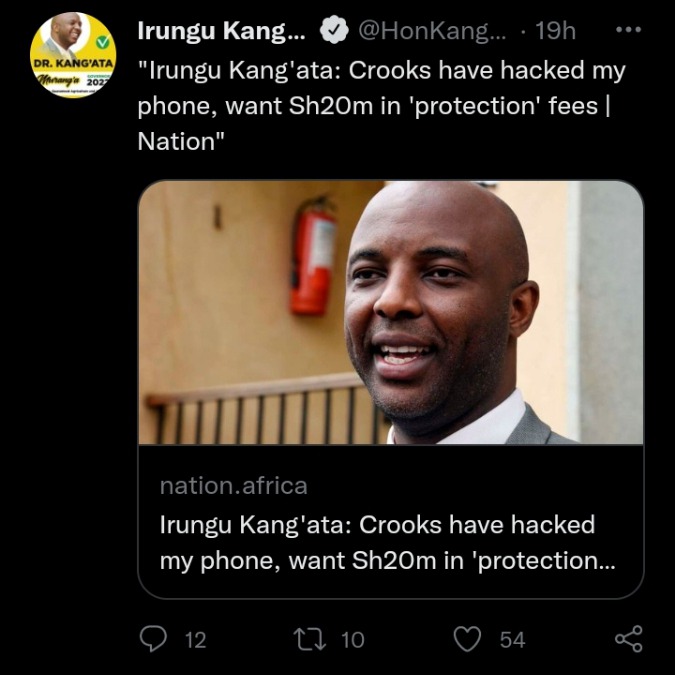 The criminals then demanded a Sh20 million payment to shield him from Communications Authority of Kenya investigations (CA). He stated that the criminals demanded the ransom to prevent the Authority from launching an investigation into his integrity for misusing his money transfer sim card privileges. The caller also advised him that if the investigation were to occur, it would have a detrimental influence on his gubernatorial campaign, including the possibility that he might be disqualified from the August 9 elections.

Alexander Shikondi, the head of police in Murang'a South, stated that the senator had reported the matter, and that it had been escalated to the Directorate of Criminal Investigations.

"The communication is a brazen technical hoax intended to tarnish the complainant's reputation," claimed the police chief.

According to him, the source of the SMS is a sophisticated Taiwanese technological device meant to broadcast bogus messages within a particular radius.

The good news is that we are on the trail of many individuals and have zeroed in on the top suspect. We will reveal specifics as soon as we get a clearer picture. However, we believe the communication originated from a site in the neighboring Kigumo Sub County," he stated.

He stated that the fictitious texts were generated by a system capable of alphanumeric masking.

"Data masking procedures modify the original data component while preserving the original format. "The bogus data is a replica of the original, but it is utilized without the original copy interacting, making it difficult to identify," he explained.

"In layman's terms, Kang'ata's mobile phone number was disguised and made to transact without the involvement of the original number.' Wachira stated.

Ruto: I Will Probe Uhuru After Elections

"I Am Sick and Tired Of Your Lies" Miguna Tells Dp Ruto Close Ally, Claims This About Degree