By dailyreporter_ke | self meida writer
Published 15 days ago - 3 views

After ouster as the senate Majority whip, Kangata has shifted from Kileweke to Tangatanga faction which is allied to the deputy president William Ruto. 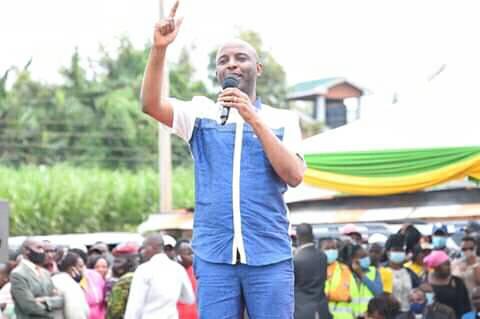 On the first rally he attended with the deputy president, Kangata faulted the handshake between Raila and Uhuru as the root cause of their woes.

In his speech, Kangata claimed that those who criticized the government earlier were not punished by stripping off their positions and he gave an example of Nandi Hills Mp Alfred keter who retained his seat despite criticizing the government.

Kangata went further to say that Raila entry to government meant that Mount Kenya was finished since he has only his 'leg' in government but leaders are stripped positions for saying the truth. Watch Kangata speech https://fb.watch/3Dj1kjcdOz/

Ruto went to Kiambaa for launching of a boda boda sacco petrol station and other fund raising activities.

Kangata Kileweke Muranga Raila Ruto
Opera News is a free to use platform and the views and opinions expressed herein are solely those of the author and do not represent, reflect or express the views of Opera News. Any/all written content and images displayed are provided by the blogger/author, appear herein as submitted by the blogger/author and are unedited by Opera News. Opera News does not consent to nor does it condone the posting of any content that violates the rights (including the copyrights) of any third party, nor content that may malign, inter alia, any religion, ethnic group, organization, gender, company, or individual. Opera News furthermore does not condone the use of our platform for the purposes encouraging/endorsing hate speech, violation of human rights and/or utterances of a defamatory nature. If the content contained herein violates any of your rights, including those of copyright, and/or violates any the above mentioned factors, you are requested to immediately notify us using via the following email address operanews-external(at)opera.com and/or report the article using the available reporting functionality built into our Platform