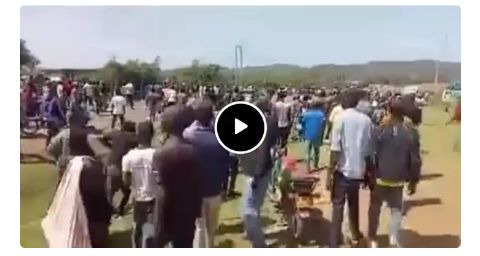 Gladys Wanga, a gubernatorial candidate in Homabay County, was forced to leave for her life on Saturday after the gathering she was speaking to became aggressive.

Wanga'svehicle had pulled over in Homabay Town to address a mob that was chanting Kidero chants.

Despite the presence of cops, Wanga was unable to provide an address to which they were obliged to run for safety.The crowd chased Wanga's team, as seen in a video captured by one of the residents.

"Kabisa kwendeni! Mambo yote, kidero! "as screams ranted through the air, one of the voices heard in the background

The governor election in Homabay County is a tight battle between ODM's Gladys Wanga and Independent candidate Evans Kidero.

The last month has seen a lot of effort in both camps as both candidates try to win voters over. Ms Wanga has held multiple meetings with various groups, especially the youth, in order to improve her social media presence.

CS Munya Reduce The Price Of Unga By 2Ksh