Speaking during Raila's Isiolo Trip on Saturday, Hon Jane Wanjuki Thitima (The leader behind DP Ruto in the photo below) has reported that they (Mt Kenya East region) won't sit down and watch as some people deliver fake and unrealistic promises which end up breaking the hearts of Kenyans. 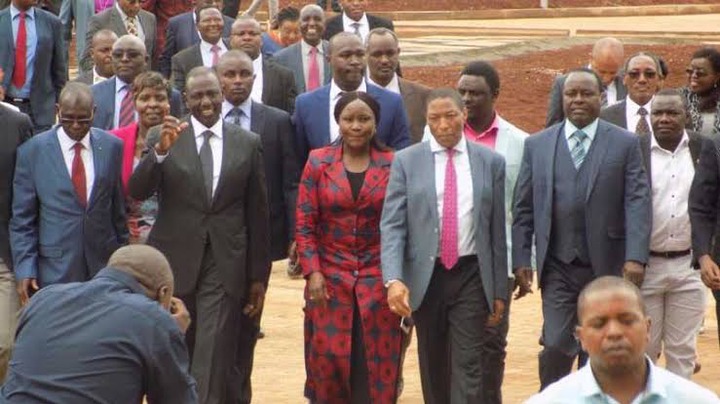 "Baba We are here to support you fully. We have come to realize that they are misleading our people and we won't fear them. We want to tell you that Mt Kenya region is behind your back and that nobody will intimidate you," Jane Wanjuki Thitima Said.

But then, this act as the latest political betrayal melted against Deputy President Willam Ruto and his camp bearing in mind that Hon Jane Wanjuki (Embu Women rep) was one of the leaders who received DP Ruto when he attended the burial ceremony of the late Joseph Nyaga (Member of the 2007 Pentagon).

And speaking during the burial service of the late Nyaga, Jane Wanjuki Assured Embu Residents that their future was secured in DP Willam Ruto's hands and avoid receiving mixed and misleading signals from the BBI pastors.

Also in 2017, former Senator Hon Lenny Kivuti protested Ruto's alleged behavior of favoring some Jubilee aspirants during the Nomination exercise, something that was perceived as a direct attack at Jane Thitima who managed to secure the Party Ticket.