By @Charlesbudah (self media writer) | 1 month ago

The battle for the Mountain King pin has remain a common issue for a long period of time,but as the way things stands,the people of the mountain can now yel which direction to take once president uhuru Kenyatta will be going for the retirement.Recently both Martha and Gachagua have been trying their Best to win the attention of the residents from the region since they were elected as the running mates for both Azimio La Umoja and Kenya kwanza teams.The duo have been trying their best to gunner more support from the region so as to deliver maximum number of votes to their principals.Reporting to the Nation media,Kieni law maker Hon.Kanini Kega has now named the leader who he believes will succeed president uhuru Kenyatta as the next political spokesperson in the mountain region.Reporting to the nation ,the director of election board in the jubilee party said that the president will also show the mountain the way to take,but according to him,it is obvious that the Mountain is with Hon.Martha Karua. 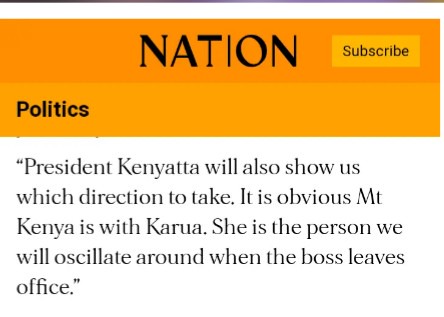 The jubilee secretary general,Hon.jeremiah Kioni also said that to hlep Karua deliver votes to Azimio side,they are now taking part in village to village compaigns so as to help the youths to consider Azimio ast their next government,"Our opponents should brace themselves for a a bruising battle." The jubilee chair told the paper.This will actually be a huge blow to the Kenya Kwanza deputy candidate Hon.Rigathi Gachagua who have been given the Mandate to spearhead Ruto's Compaigns in the central region. 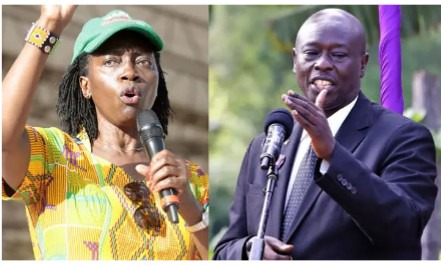 Content created and supplied by: @Charlesbudah (via Opera News )