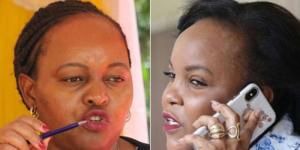 The supremacy battle in Kirinyaga on Sunday, October 10, escalated as Governor Anne Waiguru and area Women Representative Purity Ngirici clashed over a billboard.

The confrontation began early Sunday morning as workers from a local advertising agency arrived in the town and pulled down two billboards containing Ngirici’s portrait image and tried to replace them with those carrying Waiguru’s image.

It took the intervention of Andrew Ngirici the husband to the Women Representative, who gave orders to the workers to put back the billboards.

He claimed that it was wrong to pull them down and insisted that he had a right to erect his billboards in the town.

While addressing the press, Andrew noted that the Governor was trying to provoke him into political chaos ahead of the upcoming Mashujaa celebrations in the county come October 20.

The tycoon added that two other billboards that contained his wife's portrait in Samson Corner were on Friday, October 8, pulled down.

Ngirici stated that the governor was going against the successful truce meeting called by Interior PS Karanja Kibicho.

The workers who were putting down the billboard were arrested and taken to Wanguru Police station but were later released.

According to Mwea East sub–County Commandant David Kitavi, a meeting would be called to discuss the matter with the two parties.

The police commandant added that the billboard erections were part of the county's beautification before the Mashujaa celebrations.

Waiguru and Ngirici (Purity) are expected to face each other on the ballot as they battle the Kirinyaga gubernatorial seat in the 2022 General Election.

"Am Back To Take What Belongs To Me" Loretta Tells Zora

Meet Swaleh Omar Who Lives Inside A Cave In Indian Ocean.

"I have A Big Problem With Chebukati" Angry Kabogo Reveals The Issue He Has With IEBC Chairman.