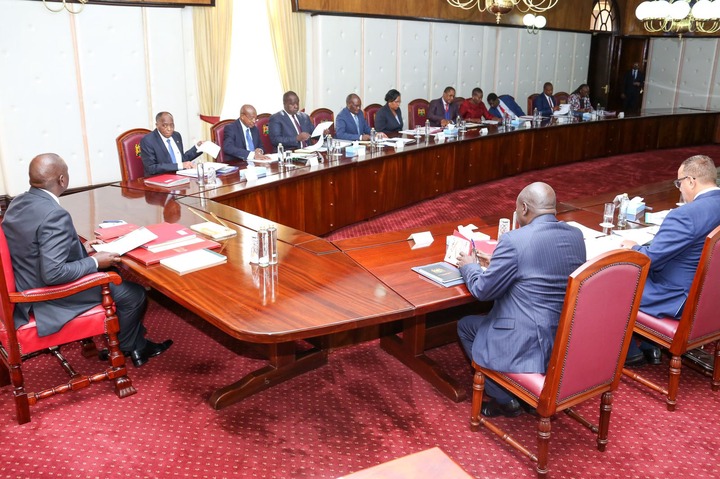 President William Ruto has appointed 22 Cabinet Secretaries to different ministries as he rushes to deliver on his first 100 days in office promises.

Oddly, the President summoned former President Uhuru Kenyatta's Cabinet Secretaries for an ordinary session cabinet meeting where they discussed the state of affairs of the country and measures to improve service delivery. They did not talk about the handover procedure.

For a moment it was even thought that Ruto would let the CSs serve for another week or two but he went ahead to name his cabinet minutes after the meeting.

All the 22 ministers attended the meeting except Raphael Tuju. Among the things they discussed was the Ebola virus outbreak in Uganda where the Health Cabinet Secretary Mutahi Kagwe gave an update as well as measures the ministry is going to put in place to prevent the spread of the strain.

They also talked about drought where the CSs suggested ways to improve on the situation that is currently ravaging more than ten counties in the North Eastern region. They resolved that children, pregnant and lactating women will be the priority in the delivery of relief food. They also came up with strategies for ensuring that lack of rain does not lead to drought.

The state of the economy and the agricultural sector were also discussed. It was agreed that the fertilizer subsidy will be extrapolated to include tea farmers who will be given cheap fertilizer through KTDA.

Ruto took a considerably long time to name his cabinet compared to his predecessors who did it within the first week of their inauguration. The meeting today also pointed out a president who was keen on spending some time with Uhuru CSs in finality.

Perhaps he wanted to show goodwill and nobility to the Uhuru men most of whom, as he says, humiliated him in public and had no respect for his office during his second term.

How To Understand That Nobody Has All The Answers

Just in; Sad News as Another KCPE Candidate Dies After Suffering This Disease, " Rest in Peace "

Man Sneaks Into Daughter's Bedroom, Engages In The Act As Mother Sleeps

What Different Menstrual Colour Means To Your Health