Makau Mutua Wowed By Ruto's Huge Influence In All Arms Of Government, Warns Against 2 Powers.

The stand off between the most powerful men in Kenya president Uhuru Kenyatta and his deputy William Ruto has attracted the attention of professor Makau Mutua.

In his article appearing on the Sunday nation, the US based scholar acknowledges the huge influence the deputy president William Ruto has in government.

He explains that Ruto is controlling almost half of government if not more hence has access to all state secrets.

According to Mutua, Ruto has a big number of members of Parliament, cabinet secretaries and governors who are on his side.

Mutua even avers that the DP has alot of sympathisers in the judiciary and within the security apparatus.

Nevertheless, the professor agues that the two Centers of power aren't good for the country.

According to him, since independence the country has never experienced this kind of confusion in government saying that even Jaramogi Odinga had to resign when he differed with his boss.

Not even the rapture between Mzee Jomo Kenyatta and VP Jaramogi Oginga Odinga at the dawn of the republic threatened the cataclysm we see today. Mr Odinga did the honourable thing, and quit of his own volition." Says Mutua.

He therefore urges the deputy president to do the honourable thing and resign from government to allow for smooth running of affairs. 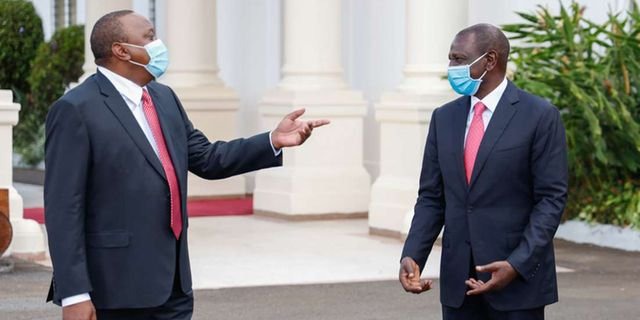 Professor gives examples of South Sudan where the rift between the president Salva kiir and Riek machar has caused continued instability and hence much suffering to the people there.

On the argument that Uhuru can as well step aside, Mutua says that it's the subordinate who should give way when unsatisfied and not the other way round.

He further says that it's imprudent to continue paying someone huge sums of money when he doesn't carryout his official duties as Kenya's number two.

Mutua who is a die-hard Supporter of ODM leader Raila Odinga agrees with the one time American vice president Hubbet Humphrey who said that the vice president can't be independent of the president.

“Anyone who thinks that the Vice-President can take a position independent of the President of his administration simply has no knowledge of the politics of government.

"You are his choice in a political marriage, and he expects absolute loyalty.” said Hubert Humphrey.

Professor Mutua asks Ruto to stop holding Kenya at Ransom and instead shape up or ship out.

Do you agree with professor Mutua? Feel free to share your thoughts and comments on this on our comments platform.