Huge Blow to OKA as Influential Politician Ditches the Coalition. 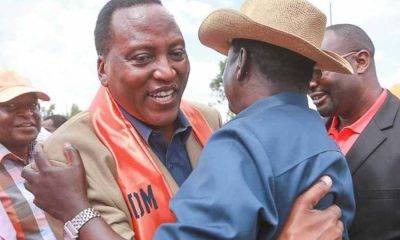 OKA hs suffered a huge blow after influential politician ditched the coalition ahead of the 2022 general elections.

According to the latest news, the legislator has officially ditched Ford Kenya led by Moses Wetangula for Raila Odinga's Orange Democratic Movement (ODM).

His confirmation of joining ODM has now been confirmed when Onyonka was received officially by the Party Leader Raila Odinga.

Onyonka had earlier revealed why he relinquished his position as FORD Kenya deputy party leader, citing a conflict of interest. Speaking during an interview on TV on Monday, November 22, Onyonka said he made the decision to step down from the party’s leadership owing to his believe in former Prime Minister Raila Odinga

He said “I am no longer a party leader in FORD Kenya. I actually relinquished my position two weeks ago when the party held its National Delegates Conference (NDC). I couldn’t stay in FORD Kenya when I actually believe in Raila,” Onyonka said

In October, Onyonka who supports Simba Arati’s gubernatorial quest for Kisii county urged the region to support Raila in the 2022 Presidential race.

He said “I urge you to support former prime minister Raila Odinga’s presidential bid and Arati for governor,”.