By Democratic (self media writer) | 21 days ago 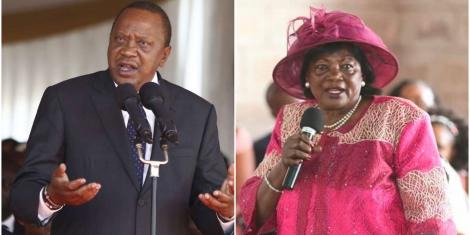 Less than a week after Nyandarua Governor and former Head of Public Service Francis Kimemia admitted to the existence of the deep state and its ability to influence election results, a legislator close to Deputy President William Ruto has made serious allegations about its operations.

Kimani Ngunjiri, a Bahati Member of Parliament known for his fearless approach and harsh criticism of President Uhuru, has detailed how the deep state intends to prevent Dp Ruto from ascending to power.

In a video posted on his Facebook account, the outspoken legislator accused the country's founding First Lady, Ngina Kenyatta, who is also President Uhuru's mother, of being part of the plot to destabilize Ruto.

According to the legislator, President Kenyatta's close family members were instrumental in securing the handshake agreement, which was formed with the goal of preventing DP Ruto from becoming the country's fifth president.

Kimani claims Raila was brought in as part of a well-planned strategy to sow discord between Uhuru and Ruto and, ultimately, to stymie the DP's State House ambitions through graft allegations. He claims, however, that this plan failed, prompting the deep state to devise a new strategy.

The second plan, according to the Bahati MP, was hatched at the La Mada hotel through a series of meetings led by leaders affiliated with the handshake.

The third plan, he claims, was to re-open the DP's crimes against humanity case at the International Criminal Court (ICC) in The Hague, Netherlands.

Here is the video to watch Ngunjiri's remarks.