Mbadi out of Parliament for 5 Days

Gwassi Constituency MP John Mbadi ,and the minority leader was suspended from the National Assembly for 5 days for gross misconduct following chaos that left an MP seriously injured on Wednesday.

The session leader,Speaker Chris Omulele ordered Mbadi out of the house after he was accused of injuring Sigowet/Soin MP Bernard Kipsengeret during a physical fight that erupted in the parliament amid controversial vote on the Political Parties Amendment Bill.

“Hon Mbadi you are directed to leave the precincts of this house for gross disorder. You are ordered to withdraw for a minimum of five days,” the Speaker ruled.

Benard Koros sustained an eye injury during the fight,''Mr Speaker I have been injured, it is very wrong that I can be injured in an Honourable House Mr Speaker,” he said, “I have been attacked by the master of violence in this house.”

After this demeaning incident, Mbadi was escorted out by Sergeants At Arms while MPs protested and booed at him,while speaker Omulele tried calming the furious MPs who remained standing for some times before he called off the session for fifteen minutes.“Following chaos witnessed in the House, I order the House suspended for fifteen minutes,” Omulele said. 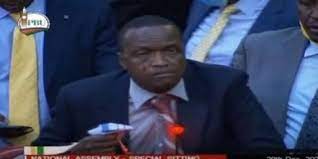 Content created and supplied by: HotNews254 (via Opera News )