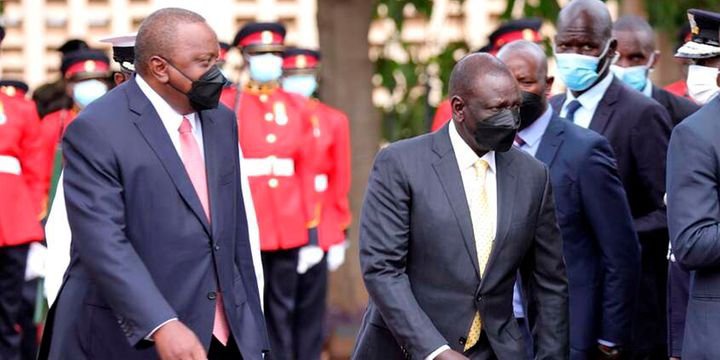 President Kenyatta has warned those vying to succeed him in next year's elections to stay away from behaviors that could incite bloodshed. He expressed regret over the defeat of proposed constitutional amendments that he claimed would have ensured political stability.

The President lauded the envisioned benefits of the Building Bridges Initiative (BBI) referendum bid, which was crushed by the courts, saying that "it shall happen," without specifying how the constitutional amendments will be implemented.

"We can't bury our heads in the sand like the proverbial ostrich." President Kenyatta stated, "A constitutional moment does not resolve itself by being ignored."

The President criticized the bad political environment that has characterized elections since 1992 in his ninth State of the Nation address to a joint session of Parliament yesterday.

He urged those in the Speaker's gallery, including Deputy President William Ruto, former Prime Minister Raila Odinga, and Amani National Congress party leader Musalia Mudavadi, not to return Kenya to the days of apartheid.

According to the President, Kenya lost Sh248 billion after the 1992 elections. According to him, people died and others were relocated.

In 2007, President Kenyatta stated that the country had lost Sh250 billion in addition to the deaths and relocation of thousands of people.

According to him, the country lost Sh1 trillion in the disputed 2017 elections as a result of political uncertainty. President Kenyatta lauded the peace he has enjoyed in his second term as a result of his March 2018 truce with Mr. Odinga, which has allowed him to focus on development initiatives.

President Kenyatta said the country had squandered an important opportunity by rejecting the BBI referendum proposal.

"The first setback was a lack of equity in resource distribution. Kenyans squandered a chance to enhance minimum county allocations from 15% to 35% by voting against the first amendment to the 2010 Constitution, he added.

Despite overwhelming support from both county legislatures and Parliament, he accused the judiciary of obstructing the people's will by scuttling the BBI.

Mr. Kenyatta claimed that if BBI had passed, counties would have received Sh562 billion instead of the present Sh316.5 billion in the 2020/21 budget, a 75 percent increase.

He said the intention of expanding the executive was to have a broader representation of the country in decision-making and to end the winner-take-all outcome of elections that creates so much toxicity and tensions.

He did, however, explain that Ndaragwa MP Jeremiah Kioni has introduced a Bill in the bill National Assembly that seeks to extend the executive by creating the role of prime minister and two deputies. It also proposes the creation of two service presidential faces

Why Everybody in Your Ward Wants to Be An MCA