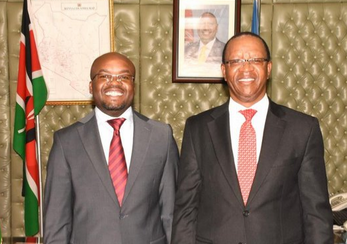 Former Interior Principal Secretary Karanja Kibicho was all smiles on Monday, December 5th, after he handed over power to President William Ruto's newly appointed and sworn in PS Raymond Omollo.

Omollo was among other 50 Principal Secretaries nominated by Ruto, and who were sworn in to office last week after the court dismissed a petition against the list.

Kibicho was one of the former staff of Ex-President Uhuru Kenyatta, and who used not to see eye to eye with then Deputy President, now President Ruto.

The Former PS was so 'powerful' that Ruto and a section of leaders from Mount Kenya and in the United Democratic Alliance (UDA) party claimed that he was trying to interfere with the August 9th polls, and that he was also pushing residents in Kirinyaga to rally behind the Azimio La Umoja One Kenya Alliance camp and support Raila Odinga's presidential bid.

Shortly after the appointment and swearing in ceremony, Omollo assured the president and the country at large that he was going to deliver on his duties. 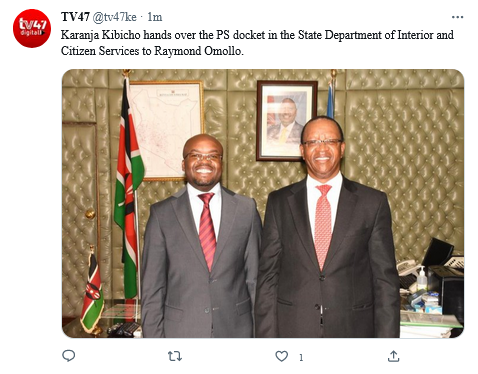