By AyodiK (self meida writer) | 8 days

Morang'a Senator hon Irungu Kang'ata today found Himself in a very embarrassing moment after logging into the Parliamentary proceedings in a zoom meeting while in a Room with alot of Noise, and further exposed after one of the attendants said that He was in a Bar drinking alcohol.

Kang'ata who was supposed to appear in the Senate today for a sitting to discuss the crucial matters resolved for the Zoom meeting, although the signals were bot connected well to make sure He joins other Lawmakers in the meeting.

However in what appeared to be some kind of misunderstanding, Kang'ata told the Speaker of the Senate Hon. Ken Lusaka that He was very available and His Video was on and ready to speak because it was His turn. He also added that He may have not sounded very clear whole reading the whole statement and presentations and they should not link Him to the problem.

"Mr. Speaker please I am there and available online and I am very ready to read my statement. I am online with my Camera and Video on, and I am surprised that you can't hear Me out. I don't know why the have some problems if connection maybe it's because I was reading the statement. "The Senator said.

Speaker Lusaka however insisted that other fellow Mps who were seated eager to hear from Him were not seeing Him properly. It was at this point that a Man's Voice was heard from the background saying that He was in the Thika Highway in a Bar called Sabina Joy enjoying Himself with drinks while struggling to attend the meeting. Kang'ata insisted that He was in His Office.

"Mr speaker He is in a Bar in Thika Super Highway drinking in Sabina Joy." A Man was heard Speaking.

On His response, Lusaka said that the Senator was not in a descent place like an Office that He claimed to be, and therefore He has broken the rules of parliament which automatically excludes Him from the normal proceedings.

"That is not an Office Senator Kang'ata and I am sorry we can't allow that. The rules are very clear on where you should be and you are out of order. Look for a more quiet and descent place and I will give you a chance to speak." The speaker added. 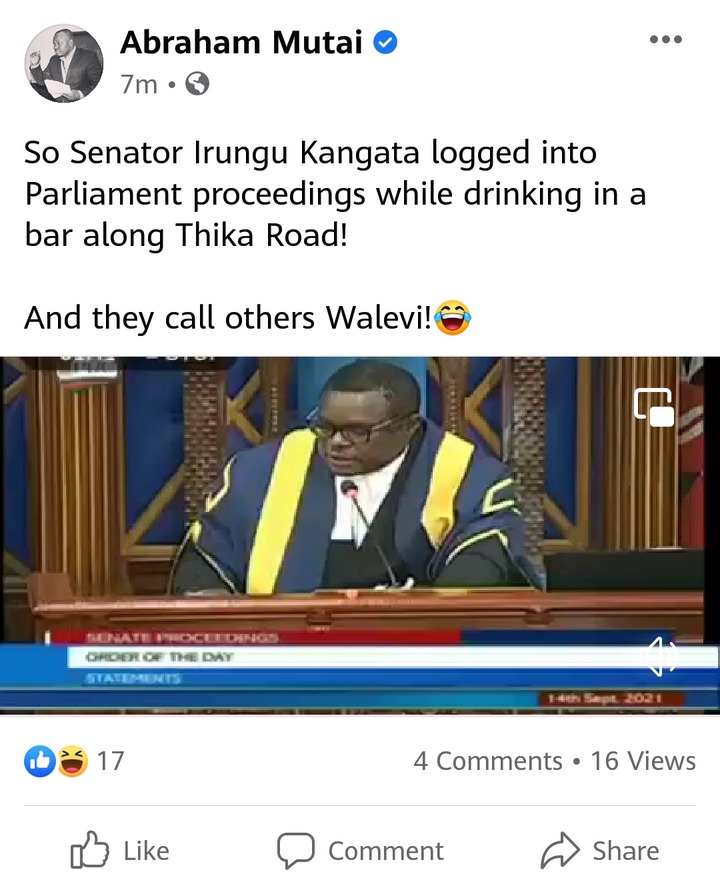 This was followed by some loud laughs from His fellow Legislators in the House who were listening to Him keenly as He made His remarks while trying to defend Himself on the place where He was and the occurrences.

Kenyans took to the comments section to give their opinions, some attacking the Mp for allegedly being in such a condition at that time when He was needed to participate in the proceedings.