By AnnFrank (self media writer) | 1 month ago 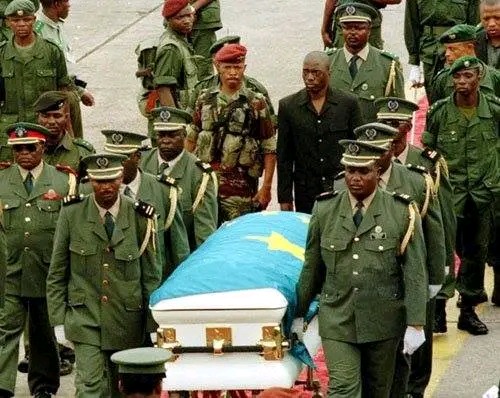 The funeral of former President of the Democratic Republic of Congo, Laurent Desire Kabila ( Photo Courtesy)

On January 16, 2001, Laurent Desire Kabila, the President of the Democratic Republic of Congo,was shot dead by his own bodyguard, Rashidi Kasereka.

The circumstances surrounding his death remain clouded. In the DRC, the authorities now consider his death a closed case while Kabila himself is now considered a martyr. But how did the former President meet his death? And who was behind it?

On May 17, 2001, Kabila was sworn in as DRC's third President after Nelson Mandela had steered the long standing dictator Mobutu Sese Seko into retirement. But the arrival of this former Marxist revolutionary was not greeted in favourable terms by the international community. But Kabila imposed himself nonetheless.

But soon after taking over power, Kabila fell out with his child soldiers who had walked witb him the long journey to overthrow Mobutu.

The tiny eastern neighbor, Rwanda, where the child soldiers were trained, fell out with Kabila. The young soldiers with the backing of Rwanda would later start a war which would outlast Kabila himself.

One fine evening, while in his office with his economic advisor, Emile Mota, Kabila was assassinated by his own bodyguard, Rashidi.

Rashidi would then try to escape but he was shot dead by Kabila's personal assistant, Colonel Eddy Kapend- taking with him all the secrets of assassination and those behind it.

The President's lifeless body would then be flown to Zimbabwe in an effort to resuscitate him but he was declared dead on arrival.

Three days later, General Joseph Kabila, the President's son, was sworn-in as the new President of the DRC.

A state funeral in honor of the former President would later be conducted. It was attended by President Robert Mugabe of Zimbabwe and Jose Eduardo dos Santos of Angola.

Stark Similarities Between The Murder Of Electoral Commissioners Msando and Musyoka

'You Will Go Home Clean' Kenyans React After Chebukati Unveiled Details Behind The 0.01% Error

5 reasons why you can’t keep a man

The 4 IEBC Commissioners Wanted Me to Subject Kenyans to Re-run, Chebukati Reveals