The Tujibebe Wakenya party leader William Kabogo now argues that he has smelt that the August 9th presidential race will result to a run-off.

Taking to his Twitter account on Friday night, Kabogo said that the main determinant of who wins the presidency will most likely be who the presidential candidates will choose as their running mates.

"I smell a rerun, it’s imminent. Like I said before the choice of running mate will decide the 5th. Am not a witch neither am I a prophet but I see," he tweeted.

His remarks comes a day after the Nation Media Group's opinion poll showed that both Deputy President William Ruto who is eyeing the top seat under the Kenya Kwanza Alliance and his rival, Raila Odinga of the Azimio La Umoja One Kenya Alliance having 42 per cent if the polls were held today. 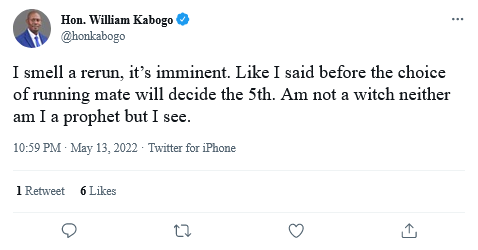 The presidential candidates have until Monday 16 to submit the names of their running mate to IEBC, a move that has been reported to shape the results of the August State House race.

It has been alleged that Ruto might name his deputy on Saturday, May 14, while Raila on Sunday, May 15 at Kamukunji Grounds during his Azimio rally.

Photos; Details about The Man Who Was Found Dead While Naked Revealed