By Mwokozi (self media writer) | 23 days ago 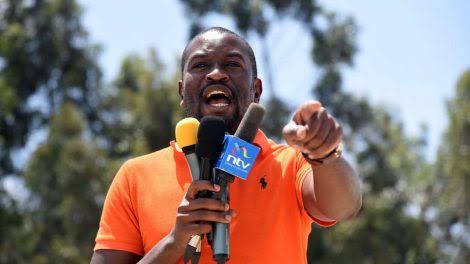 According to the ODM secretary general Edwin Sifuna,he has slammed all the claims by UDA and IEBC saying that there is no law on the Earth's surface that prohibits one from supporting his best candidate in politics.

Sifuna said that there is no law in Kenya which hinders cabinet secretary from involving in politics. He added that CS are the president appointees and a president is a Politician with a Political agenda. He went ahead to tell them not to fear anyone and they should continue drumming up support for Raila Odinga.

"Lastly I want to tell my two brothers we have here. Eugen Wamalwa there is no law that hinders you from giving your people the right direction politically. Same to you Munya. In 2017 we said that Matiang'i should not engage in politics but they told us to leave Matiang'i alone,they even teargassed us and we're still healing. So let nobody threaten you. Continue saying baba tosha everywhere," Sifuna said.

"Lee Kinyanjui Will Be Raila's Deputy" Claim Mutahi Ngunyi, As He Reveals Why Karua Is Not An Option