By CrimeBuster (self media writer) | 11 days ago

Drama was today witnessed in Kanjiru Gichagwa after a rowdy group of Youths interrupted honorable Waigurus speech wanting him to go home during a public function.

While Delivering his speech, honorable Waiguru said that UDA was the way forward due to the fact that it was the only party that allegedly stands out in terms of working with common kenyans. According to the reports given by Waiguru, she said that it's no doubt that UDA has the majority of supporters in the country adding that kenyans should support UDA, work together in order to fulfill their goals.

"The United Democratic Alliance Movement is the party to go with. Let no one lie to you that it's not because as far as I'm concerned, it's the only party in Kenya that's actually looking forward to working with Youths and poor people in the society. We can't keep on denying the fact that UDA has already attracted Alot of kenyans. Let's just work together in order to make sure we accomplish our goals", Honorable Waiguru.

However, her speech was stopped for a while after a group of Youths caused a commotion by fighting for unknown reasons. In a news report that has been shared by a reliable source of information, several Youths could be heard telling her to go home. Their statement was followed by a dramatic scene after the other group attacked them leading to a fist fight between the two groups.

While reacting to this incident, kenyans who took to their different social media accounts to express their opinions and suggestions on the matter have called upon fellow Kenyans to avoid this kind of behavior due to the fact that Kenya is heading for the General Elections, for these kenyans they claimed that it was not okay for one of 'to attend a meeting just to hekcle a Politician. 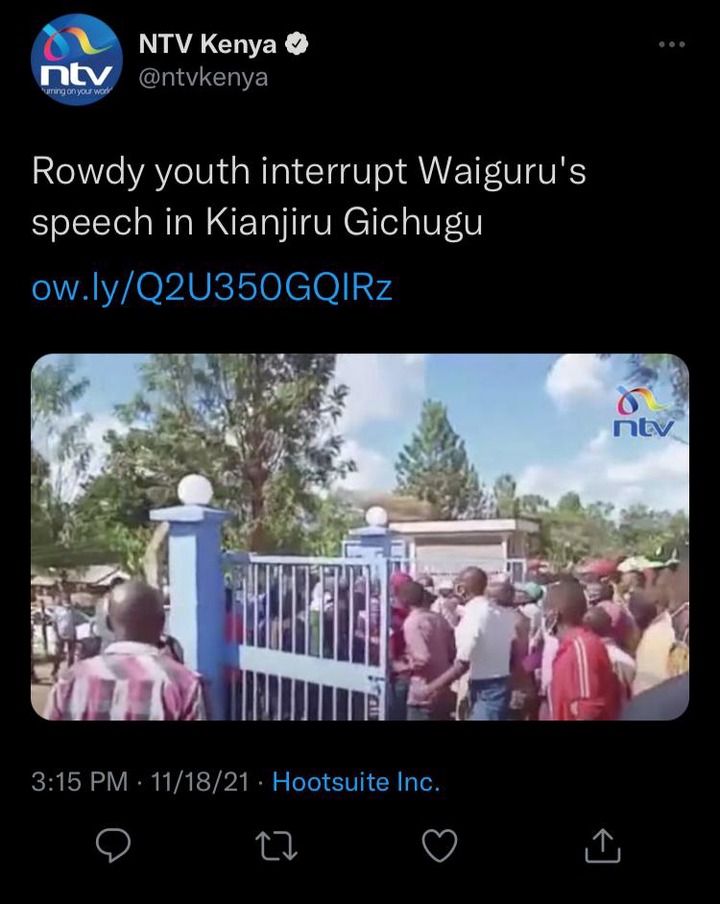