A man facing Sh. 4.2B corruption case surprises court when he appeared in a vest

By The_Don (self media writer) | 8 months ago

Fredrick Onyango Chere, who is facing charges along with former Kisumu County Assembly Speaker Onyango Oloo, appeared in court in front of Nairobi Chief Justice Douglas Ogoti in a white vest he was wearing while awaiting trial. 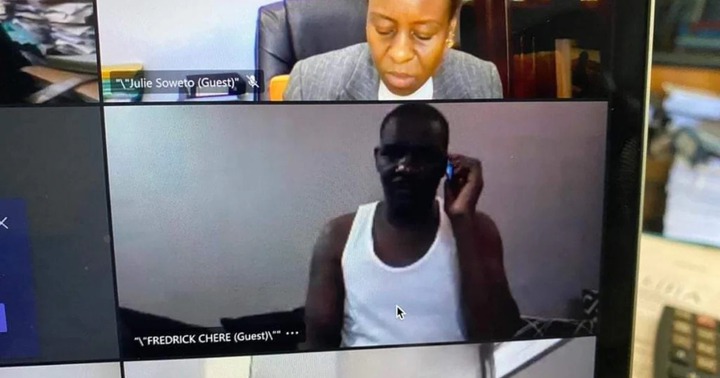 Ogoti and other lawyers including Professor Tom Ojienda, State Attorney James Kihara and Katwa Kigen were speechless after seeing Chere's robe and it was then that the chief justice asked the suspect to go and dress appropriately in court.

For his part, Ojienda asked the judge to compel Chere to dress appropriately in accordance with the court's code of conduct which provides guidelines for court dress for the accused and other actors appearing in court.

The judge finally ordered the defendant to leave the session.In the case, former Speaker of the Kisumu County Assembly, former Director General of the Lake Basin Development Authority (LBDA) Peter Anguko Abuok and Bobasi MP Innocent Obiri Momanyi were charged with embezzlement of KSh 4.1 billion in 2020.

Ogoti also produced an arrest warrant that had been issued after Oloo failed to appear in court.

Kihara Kariuki from the office of the Director of Public Prosecutions, however, opposed the removal of the document saying that Oloo should have submitted a formal request.

The matter was being considered for a pre-trial hearing and scheduled hearing dates, the case will be heard on May 6, 2021, before Anti-Corruption Judge Teresiah Murigi

How to get a quality car at a cheaper price

Benefits of drinking water no one told you about.