By Kadiva (self media writer) | 3 months ago 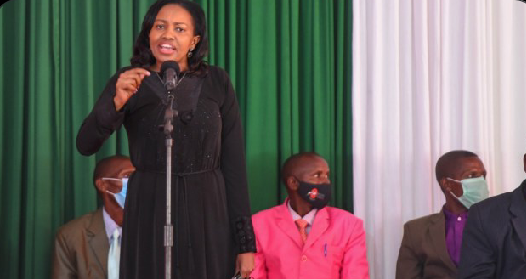 Last week’s withdrawal of Deputy President William Ruto’s security has taken a new twist after Nakuru Senator Susan Kihika demanded statements from three officials following their utterances that appeared to suggest they had personal grudges against the DP.

Kihika was particularly incensed by utterances made by the aforementioned leaders in weeks leading to the withdrawal of Ruto’s security.

She urged the Director of Criminal Investigations (DCI) George Kinoti to reopen the matter and grill the three officials before something bad happens to Ruto.

“I want to send this message to DCI Kinoti and all the other investigating agencies.”

“There are three people in this country that we must see publicly recording statements.”

“The first person is Atwoli… We want Atwoli to record a statement and we want to know he meant when he said Ruto will not be on the ballot in 2022.

“The second person is Karanja Kibicho, the PS for interior… The third one is Murathe. He said that he had a movement to stop DP William Ruto,” she stated.

This comes just a day after the DP claimed that his life is in danger, following the withdrawal of the General Service Unit (GSU) from his security detail and their replacement with the Administration Police (AP) unit.

Atwoli has famously claimed that Ruto’s name will not make it to the ballot in the 2022 General Election, while Murathe made it his mission to ensure that the DP does not ascend to the Presidency, vowing to stop him.

In June-2019, Ruto announced that his life was in danger after reports emerged that a number of Cabinet Secretaries had converged at La Mada hotel believed to be planning his assassination.

Ruto Makes a New Claim, Alleges The New Strategy Being Used to Deny Him Presidency

8 Big Changes You Need To Make To Transform Your Life?