By Mkombozii (self media writer) | 1 month ago

With the appointment of Amani National Congress (ANC) Party leader Hon Wycliffe Musalia Mudavadi to the powerful position of Prime Cabinet secretary by President William Ruto, He is expected to relinquish his position at the party to take up the new role and serve the country in the capacity of Prime CS. 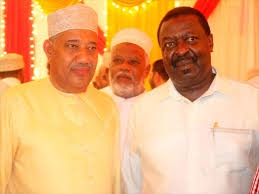 Musalia Mudavadi with Issa Timamy in a past function

The ANC boss was assigned roles by the president to be a principal assistant to the president and his deputy in combination with state departments, he is also tasked to push for the government agenda in both houses of Parliament to ensure smooth approval of the government's legislative agenda.

As a legal requirement, persons appointed in cabinet slots have to set aside their political party leadership roles to impartially serve Kenyans. As such leaders of political parties, will step aside and hand over leadership to another individual.

Mudavadi-led ANC party is likely to be taken over by the Lamu governor Hon Issa Timamy who is the seniormost political figure in the party after Mudavadi.

It must be remembered that ANC had two deputy party leaders before the August election, but with the defection of Ayub Savula to the DAP-K party, ANC was left with Mudavadi as party leader and Issa Timamy as the only deputy PL. 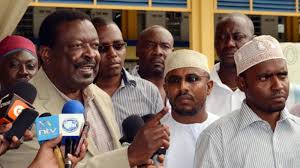 Politically, the ANC party has only one governor in the republic of Kenya after senator Malala was defeated in the Kakamega gubernatorial race by Fernandes Barasa of ODM. All factors now point at Lamu governor Issa Timamy as the best-suited successor to Mudavadi as party leader.

Others who have to relinquish their positions included Chana Cha Kazi party leader Hon Moses Kuria who was appointed Cabinet Secretary for Trade, Hon Justine Muturi who has been proposed for the position of Attorney General, and immediate former Machakos governor Dr. Alfred Mutua of Maendeleo Chap Chap party who has been appointed the CS for foreign affairs.

Content created and supplied by: Mkombozii (via Opera News )

No Mass Action in Kakamega, Khalwale Tells Raila that They Will Not Allow Him to Hold Protests