Deputy president Wlliam Ruto has finally updated His social media information in the handles section that describes His position that He holds in government, hence attracting reactions from Kenyans, especially those supporting their faction since they never expected such spee, even before their official swearing in.

Earlier, Ruto's Social media read the deputy president of the republic of Kenya, and also included other information that described Him and His family. Also, the government of Kenya has updated their systems in 2013 and included His name in the National recorders just like the national assembly and other state departments.

However, after today's announcement by the IEBC Chairman Wafula Chebukati that declared Him the winner, Ruto quickly moved and changed the description to President elect in the republic of Kenya, now that it's official the position He was awarded. 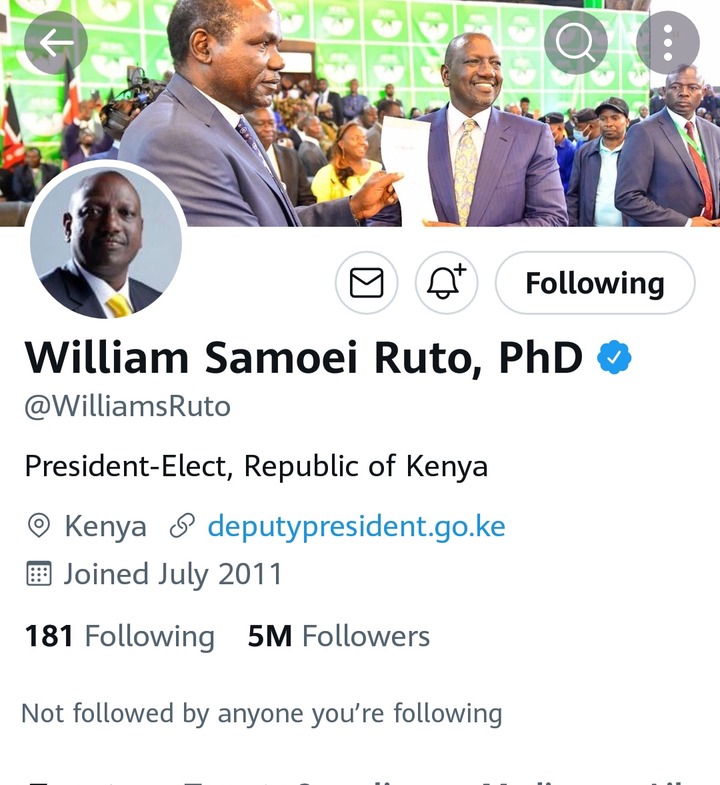 It has not nee the established however if He was the one who made the changes or His twitter Admin, who has been assigned to take care of his accounts, now that He is busy and also a high profile individual in the society. Reports revealed that Hon. Ruto ordered such changes in order to start assuming Office and other responsibilities that comes with the badge, and the most powerful person in Kenya according to the constitution.

Kenyans who would not maintain their patience rushed to the comments section some saying that Ruto decided to do that in order to shift the minds of many from thinking about Raila and other allies who keep challenging His victory, while others congratulated Him sayin that He is just doing His own job and it's His right to do so now that He has been elected anonymously and announced.

Deadline for registration of all sim cards