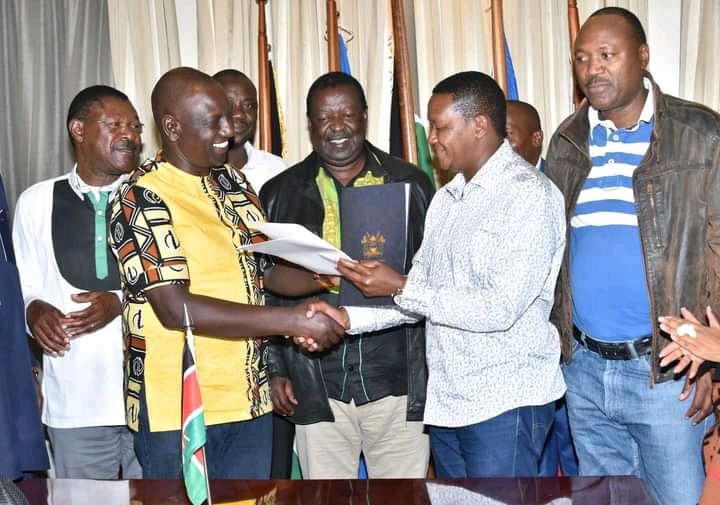 With reports coming out now, it has come to the attention of Kenyans that the top political partners of DP Ruto in Kenya Kwanza Alliance have started to show some signs of losing faith in the victory of the UDA presidential candidate.

That is after some of them come out boldly to declare their political interests ahead of the August elections despite having been promised good deals by the Deputy President.

Among them is the Bungoma County Senator Moses Wetangula who was promised the position of the speaker of the National Assembly but has still decided to go and defend his Senate seat.

Senator Wetangula is one of the three very top Kenya Kwanza Principals who formed the coalition after UDA, ANC and his party Ford Kenya joined forces at Bomas of Kenya during Mudavadi's earthquake declaration.

We also have the Machakos County Governor Alfred Mutua whom is being said according to IEBC latest reports that he is eyeing MP seat of Mwala Constituency.

If that is truly the case, then he will have to face off with DP Ruto's UDA candidate Vincent Kawaya despite being promised a nomination slot in UDA government.

These are what have caught the attention of City Lawyer Donald Kipkorir who has now come to question if truly the DP and his partners are that confident of the Kenya Kwanza victory.

According to him, only a person who is not confident of victory has plan B like Wetangula and Alfred Mutua.

That means that if they were sure of them forming the next government, then they would have not make such decision after being promised such good deals.

Instead, their focus would be on how to support DP Ruto to ensure their plans go through as indicated in the power-sharing document.