Busia border post was closed for the better part of Saturday morning as demonstrations rocked the western border town. Fish traders at the Busia fish market took to the streets barricading the border gates protesting against harassment by the Ugandan government. According to the traders, UPDF (Uganda People Defense Forces) officers are holding four trucks for close to two weeks carrying dried fish commonly known as Obambla destined for the Democratic Republic of Congo (DRC). The Uganda government insists the fish is from Ugandan waters and not Kenya. However, the traders who spoke to this writer vehemently denied that, maintaining that they source their fish from Lake Turkana in Kenya. The traders, speaking to the press, accused Kenya for being too diplomatic in allowing Ugandans and other East Africans to conduct business in the country without any restrictions. Efforts by police officers to disperse the traders bore no fruit as some of them chained themselves to the customs gate while some lay down on the ground stopping the movement of trucks out of the country. Carrying placards and twigs, the traders, mostly women, called on President Uhuru Kenyatta to intervene on their behalf. The fishmongers vowed to stay put until the Museveni led government releases the four cargo trucks. Conservative estimates put the value of cargo held by each truck at least four Kenyan million bringing the total value at over 16 million shillings.

The traders were still waiting for the Busia county commissioner and his Ugandan counterpart, the local RDC (Regional District Commissioner), to address their plight at the time of going to press. 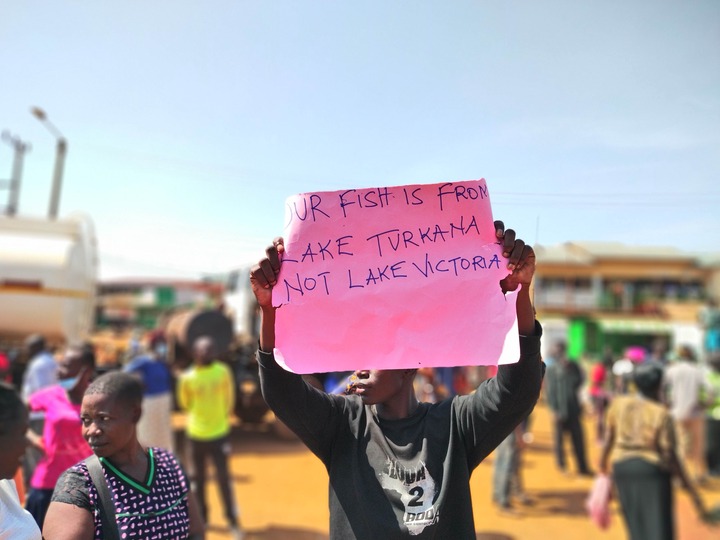