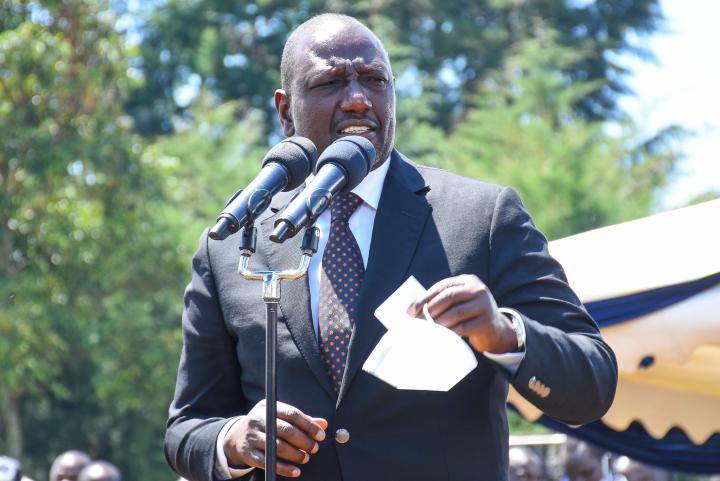 Deputy President William Ruto has told the state not to brand his meetings with low income earners as a recipe for class wars.

He made the remarks just a day after 0DM leader Raila Odinga met Mt Kenya Foundation leaders in his charm offensive to win the region's support ahead of the 2022 presidential contest.

Dr Ruto said freedom of political association was a constitutional right that his opponent Raila enjoyed while meeting the "rich'". Speaking at Mukurwe-ini in Nyeri County during the burial of Richard Kaguchia Gichohi, father of Nyeri County Assembly Speaker John Kaguchia.

The DP said there should be no fight or conflict when he meets "hustlers" to plan how their interests will be catered for should he form the next government.

"We have democracy and freedom of political affiliation. When the rich endorse a certain candidate to protect their property, that is okay, But my meetings with the hustler should not be termed class wars or incitement," Ruto said.

"The Big Four agenda was replaced by reggae, with leaders crafting a ploy to establish political positions. But there is hope, since the bottom-up model encompasses the Big Four agenda, which entailed agriculture and universal health coverage" he said.

To counter a narrative by Raila that he said Kibaki Tosha in 2002, Ruto accused the ODM leader of trying to sneak superior presidency that the former president reportedly refused during his tenure.

"Its good for our fathers to meet with presidential candidates, but where have they been when our people were evicted from Kariobangi, Nyamakima and other areas?" posed Mr Nyoro.

Mr Gachagua dismissed the meeting as a club of the rich only lying to themselves that they can deliver votes for Raila.

"Since they can reach Raila, we only need them to get an assurance from Raila that he will accept the outcomes of the presidential elections and that he will not swear himself if defeated," said Gachagua.