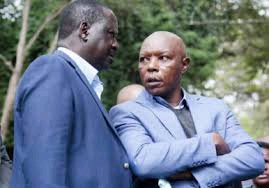 Former mungiki leader Maina Njenga who is currently a preacher has sensationally Claimed that ODM leader Raila Odinga will get 60% of votes from mount kenya.

Njenga who is seeking to vie for Laikipia Senatorial seat on a KANU ticket said Raila's ideologies resonate well with the people in the vote-rich region.

He further dismissed critics who are saying that Raila has failed to woo the region in his quest for votes ahead of August 9.

"Tinga will get over 60 per cent. He can climb the mountain and he will be very successful. When others climb it with wheelbarrows, he will be climbing it with a tractor.

A tractor is a machine that goes on itself, but a wheelbarrow uses human strength,” he said as quoted by nation newspaper.

Njenga said Raila is the best presidential candidate that the country needs as president uhuru heads into retirement.

He downplayed Ruto's recent union with Mudavadi saying Raila is still very popular in Western and will end up getting a lot of votes from Mulembe nation.

He stated that the Kenya Kwanza Alliance will soon experience power wrangles when it comes to choosing a running mate.

According to the paper, alot of attempts at the life of Maina Njenga have been Made ever since he left the proscribed mungiki group.

Because of that, he always lives in a secluded life and keeps on changing phones and locations periodically.

In 2014, Maina survived a gun attack when two vehicles includibg his Subaru Forester were sprayed with bullets leaving five people dead at oljororok near Nyahururu.