By Paulco_Updates (self media writer) | 3 months ago

Political muscles keeps on ravaging the country as 193 days remains to August presidential elections. Millions of Kenyans are eagerly waiting to see President Uhuru's successor after the polls. Tension remains high in the country raising political temperatures. Every focus is on the presidential race which has been considered to be a two-horse race, between Orange Democratic Movement Party Leader Raila Odinga and United Democratic Alliance founder William Ruto. 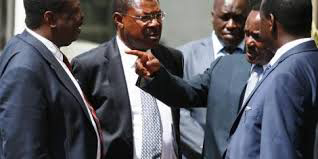 Wiper Party leader Stephen Kalonzo Musyoka has dismissed these allegation of People claiming that the battle to the state house is a two-horse race. He declare his interest in the presidential race saying his journey to State House is unstoppable

This come days after OKA unceremoniously divorced during the National Delegate Congress at Bomas of Kenya, where Amani National Congress Party Leader ,Musalia pronounced to work with William Ruto to form the incoming government. Kalonzo has also breaks silent revealing why Musalia Mudavadi betrayed OKA and joined Ruto. He claims that ANC party leader new he was going to be the flag bearer of OKA, hence he couldn't stand it

In a post shared at Kenyans.co.ke ,Kalonzo has said his road to State House is clear and nothing will stop him from ascending to power by succeeding President Uhuru. Kalonzo started his campaigns yesterday where he championed his bid in Ukambani, Kitui County. He was accompanied by Gideon Moi and ODM presidential aspirants Jimi Wanjigi. He has also stated clearly that he has been receiving calls to join Azimio but he refuses saying One Kenya Alliance is still intact. Kalonzo declaration to appear on the ballot is a huge challenge for Raila and Ruto since Ukambani votes are secured and is out of bounce.

Angry Kenyans has also reacts advising Kalonzo to stop wasting time and join Azimio since he will never win any election. He should stop circumnavigating and wasting resources yet he knows he can't ascend to power. Do you think Kalonzo will contest for the president or join Azimio? Share your thoughts and views because they are of high importance. Below are the reactions

The Main Reason Behind Banning Political Rallies in Kisumu

Opinion: The best course to study at the University of Eldoret

How to invest 5000 shillings in poultry farming.

Drama In Kakamega County as A Witch Doctor Aids Police To Arrest Thugs.