"I'm Not Mad, UDA Has A Track Record" Ruto Says As He Donates Huge Amount Of Money In Narok

By NewsArena (self media writer) | 20 days ago 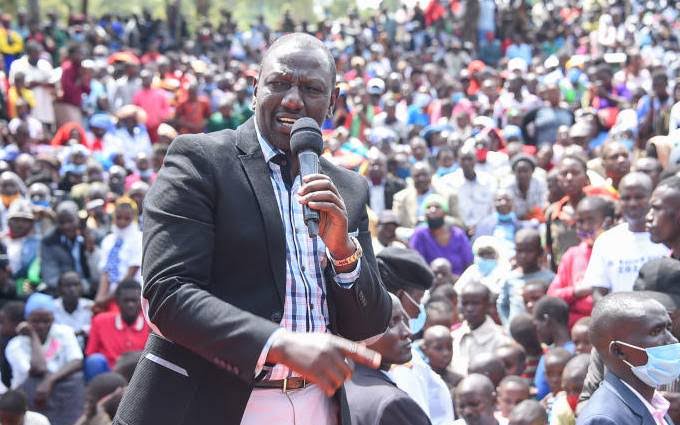 The deputy president William Ruto was today campaigning in Narok county in his strategy to woo the North Eastern and Mid North Eastern counties. He was joined by leaders allied to him in the county which was once ODM leader Raila Odinga's stronghold.

In Narok, the DP took credit for all the government projects the Jubilee regime has done. He boasted of the SGR, the roads and infrastructure that has been witnessed in the country posing that if a railway was not hard for him to construct, how can bottom-up economic model be hard to implement.

"I helped President Uhuru build new roads and even a railway line, do you think implementing the Bottom-up economic model will be hard for me," he posed.

In addition, Ruto also drummed up support for his new party UDA arguing that it has a proven track record unlike other parties. Ruto told off his competitors insisting that he will secure the future of the poor and downtrodden as opposed to constitution amendments. While saying this the DP reminded his competitors that he was not a drunkard or a madman.

"I am neither a drunkard nor a fool, and I am not mad as well. I have said that those who are seeking to create positions for themselves by amending the constitution will have to wait until the youth have jobs," he announced.

William Ruto finished his day-one rally in Narok by donating a total of Ksh 4 million. He gave Ksh 3 million to Bodaboda operators in Kilgoris and Ksh 1 million to women who own small businesses.