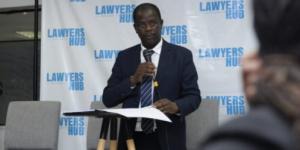 The name Duncan Ondimu may not be very synonymous with millions of Kenyans as it has hardly been common outside the courtrooms.

However, lawbreakers and litigants in the corridors of justice might have come across Ondimu and his fearlessness in one instance or the other.

Ondimu is a Senior Principal Prosecution Counsel in the Office of the Director of Public Prosecutions (ODPP), a capacity he has held diligently since 2013.

Before finding fortunes in the ODPP, Ondimu ran a law firm, M/s Ondimu and Co. Advocates in Kampala, where he acted as the Managing Partner.

He also taught at Kampala International University as an assistant lecturer from 2008 to 2013, distinguishing himself as one of the most vibrant legal minds.

Compelled by the desire for competency and a leadership with integrity, ODPP, the then new-birth of the 2010 Constitution, authorities poached Ondimu from the neighboring country back to serve his people.

He has extensive skills in matters criminal practice, legal research, investigative skills as well as experience in international crimes including extremism and human trafficking.

Ondimu started his work at the Upper Hill-based prosecution center, presiding over high-profile cases that attracted public attention and brought his name to the limelight.

The counsel will be remembered for helping address the atrocious trend that arose in 2014 of stripping women who dressed 'indecently'. Ondimu successfully led the prosecution of three people in connection with the case and taking way her belongings at Githurai 44 in the same year.

Ondimu also came to the rescue of Kenyan gymnast teen, Wendy Waeni, whose justice risked being obstructed by her former manager. When Waeni publicly decried extortion from her manager, who never remitted a coin to her despite her worldwide high level performances, the manager took to social media to expose Waeni's private life in a bid to obstruct justice that she had just begun seeking.

Ondimu acted swiftly in the capacity of the DPP to counter the manager's move, addressing the public outcry that had become rife following the teen's revelations.

He also presided over Terry Kriegler pedophile case, where a United Sates national was accused of sharing minors' private photos online to foreign clients, which saw the suspect jailed for 50 years.

Such and many other cases have distinguished the counsel as an enthusiast for the interest of the marginalized and the less fortunate in the community and cemented his competency as a prosecutor.