Several injured and hospitalized as chaos erupted at Jua Kali grounds in a candidate rival clash.

After supporters of the two front-runners in the county gubernatorial campaign battled, three persons are being treated for injuries at Homa Bay Referral Hospital.

Before their final campaign rallies on Saturday, Gladys Wanga, an ODM candidate for governor, and Evans Kidero, an independent, engaged in a fight in the town of Homa Bay.

However, violence broke out at Jua Kali grounds early on when youngsters who were purportedly supporting Wanga attacked the area and began kicking chairs and tearing down tents. 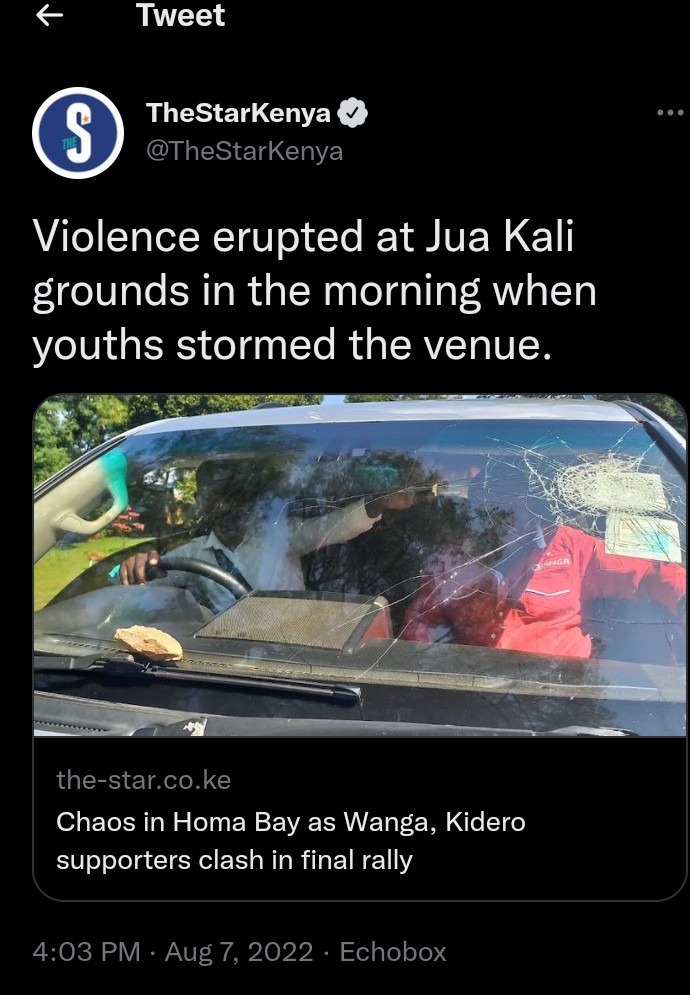 When the incident took place, Kidero was still taking part in a number of protests, including those in Magunga, Mbita, Ndhiwa, Oyugis, and Kendu Bay.

Prior to relocating to Kabuoch in Ndhiwa, Wanga had formerly held in Makongeni in the town of Homa Bay.

The youngsters got into a fight at the Jua Kali grounds as they attempted to eject Kidero supporters from the area.

According to one of the witnesses, the kids had no desire for Kidero to conduct a demonstration there. Two Kidero supporters were hurt and transported to the hospital.

Before the police could step in and stop them, they attacked Wanga supporters.

In order to disperse them and calm the situation, police resorted to use tear gas.

"Near the stadium gate, there was one injury. A hospital was called to treat the man, "a local said.

Moses Lilan, the commissioner for Homa Bay County, called the acts regrettable and stated that inquiries had been opened.