Mp Oscar Sudi, has today 23rd, October 2023, accused Tarus of duping the congregation with the statement insighting that politicians were taking the moment to score points for their favourite candidates. 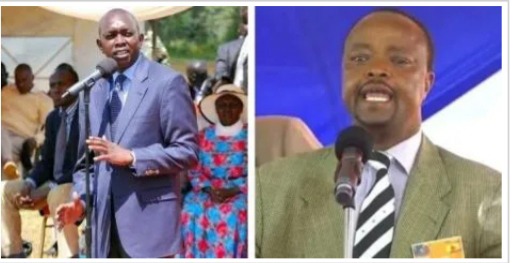 According to Kenya Report, Sudi further termed the actions by Tarus as a circus and l pointing a finger at politicians who represented the former PM of being "conmen".

The seemingly angry legislator reportedly disclosed that the Gov't doesn't value athletes and that the recent Olympics were sure proof.

The Kapsaret Mp drew a comparison the Kenyan athletes received that of their Ugandan counterparts under Hon Yoweri Museveni's leadership.

Sudi castigated Tarus, saying he had authored the statement that he purported was from ODM Chief Raila Amolo Odinga and accused him of only pushing the ODM leader's agenda because of the monetary-benefits he was enjoying.

He went as far as publicly repulsing Taru for allegedly supporting Raila as a way to spite Deputy President William Ruto.

"CAS of Sports is here reading us statements but the national government has not done anything for these athletes. We have very many conmen here, even this government is just full of conmen. Another one here is purporting to read a statement from Raila, this is just fraud.

"I can tell you for free that Tarus has written that statement himself. All these people are just frauds. I saw Tarus speaking in Eldoret the other day against Ruto. Your stomach is very small compared to all these people, don't speak against someone from your own bloodline,"

Sudi accused After his remarks on Dp Ruto last Friday when Odinga took his Azimio La Umoja campaign in R. Valley and asked Kenyans to ‘stop thinking that all Kalenjins are thieves.'

Taurus, according to the statement, launched a scathing attack against the second in command, accusing him of contributing to the Rift-Valley region's problems.

Tarus, through humour stated that the Rift-Valley locals have long been oppressed and he accused Dr Ruto of killing the region's economy.

"First of all, I would like to thank the Right Hon Prime Minister for finding this rare opportunity to meet the oppressed-people of Rift-Valley."

He poured his heart out, saying Ruto destroyed the region's economy through refusing to pay farmers and taking money from cereals-board.

He also faulted the Ruto for selectively appointing people in gov't & destroying careers of great-men and women in the region such as former Minister of Agriculture, Hon. Sally Kosgei, former parliamentarian, and Kenya's High Commissioner to S. Africa, among others