Don't Be Intimidated By People With Helicopters-Ruto Ally

By Jackwriter (self media writer) | 1 month ago 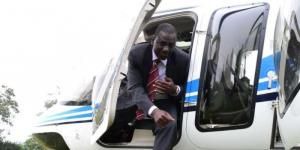 A governor allied to Deputy President William Ruto has cautioned residents of his county against falling prey to politicians out to advance selfish agenda.

Speaking in Kapkures on Monday, September 6, Uasin Gishu Governor, Jackson Mandago, asked the youth to be wary of politicians who jet into the area on helicopters promising them heaven yet they cannot deliver even on the basics.

He cautioned the youth that such politicians have nothing to offer except selling fear and propaganda.

"They will come here in helicopters to bring you propaganda, yet you only came here with a bicycle," the Governor stated.

Mandago further advised the youth to shun divisive politics, adding that they have always lived in harmony since 2013 despite being from different communities.

The Governor also told the youth not to be worried about what is happening to DP Ruto, explaining that what he was going through was just a passing wind.

Taking a hit at the recent meetings at State House in which the country's number two had been left out, he assured them that Ruto would be President come 2022.

"Relax, what is happening at the top will be sorted. We know who will be the fifth President," Madago assured.

He called for the people to come together and back the DP's quest for the presidency under the United Democratic Alliance (UDA).

Mandago told the residents of Kapkures, which is part of the constituency formerly known as Eldoret North, that he need not campaign for the DP as they already know his track record.

Mandago assured residents that UDA would form the next government and even invited a politician allied to his 2017 rival, Zedekiah Kiprop alias Buzeki, to join the Ruto-linked outfit.

The out-going Governor also encouraged individuals to contest for the gubernatorial, Senate, Member of Parliament and Member of County Assembly seats to do so under UDA. He urged the residents to be receptive to candidates despite their tribal background.

DP Ruto has been engaged in a public spat with the government he is part of. The latest onslaught was when the Interior Cabinet Secretary, Fred Matiang'i, publicly disclosed property owned by the latter when he was summoned by Parliament to explain the change in his security detail.

On Monday, September 7, the Jubilee Party through Secretary General, Raphael Tuju, castigated its Deputy Party leader, asking him to account for his wealth

OKA Principals Hit Hard Again Ahead of the 2022 General Elections