"It's Over For Baba" Havi Speaks On Raila's Blunder That Might lead To Destruction, Predicts Sad End

By MJcreativez (self meida writer) | 4 days 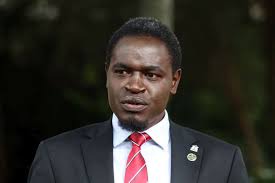 The Legislator stand on BBI alongside James Orengo has caused him The position. The Two Believes that the Parliament Will not act As Flower Girl To appease Few individuals rather will perform it's Mandate.

Orengo And Otiende Amollo are highly respected Lawyers and Proved their Potential During their 2017 Election Petition where They Won.

"ODM Party has completed self annihilation in the National Assembly with the recall of Otiende Amollo from JLAC. In Senate, Orengo is the target. With John Mbadi and Mohamed Junet as his illegal advisers, Raila has committed an apocalyptic political error. It is done, Baba" Nelson Havi

He argues that Orengo team is better placed To advise the Enigma on Legal issues. James Orengo commonly knows As walking constitution has been working with Former Prime minister for decades but relationship seems to be turning Frosty.

The Chinese Debris Rocket Has Landed Into The Indian Ocean After Earlier Prediction Bringing Fear.