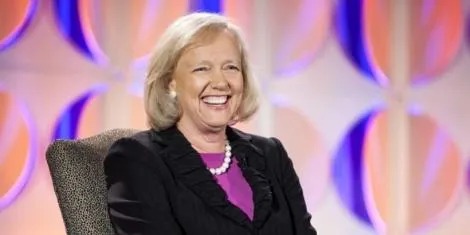 US President Joe Biden nominated business mogul Meg Whitman for ambassadorial post to Kenya. Her nomination has been met with questions from Kenyans, seeking to know more about the incoming envoy.

Her net worth stands at Ksh541 billion which makes her the richest ambassador Kenya has ever had from the United States. She is nearly ten times richer than President Uhuru Kenyatta, whose net worth, according to Forbes, was estimated to be Ksh56 billion .

Whitman's entry into politics was in 2010, where she unsuccessfully ran for the California gubernatorial seat where she set a record of spending Ksh16 billion ($144 million) of her own in a political campaign.

The record was only broken last year after Michael Bloomberg spent Ksh105 billion ($935 million) of his own money in his bid for the presidency in 2020.

Although various US publications have pointed at Whitman's lack of diplomatic experience the one time California gubernatorial candidate has a lot of experience in the business field where she has managed to build fortune 500 companies.

According to Forbes, the 65-year old was credited for taking e-commerce corporation, eBay from Ksh643 million to Ksh903 billion in sales as CEO from 1998 to 2008.

Whitman also served as the CEO of Hewlett-Packard alias HP, which is an American multinational information technology company from 2011 to 2015, where she oversaw its split into HP Inc. and Hewlett Packard Enterprise.

She stepped down as CEO in February 2018 and got a board seat at multinational consumer goods corporation Procter & Gamble popularly known as P&G. During this period, Whitman also got a board seat at Dropbox, a technology company based in San Francisco, California.

In the early 1990s, Whitman served as senior Vice President of marketing at the consumer products division of the Walt Disney Co., where she was credited with Disney’s acquisition of Discover magazine.

Whitman was CEO of short-form video platform Quibi, which shut down seven months after it launched. Silicon Valley critics blamed her citing her "failure of leadership due to her lack of experience in the industry of the company she is running".

In 2018, Whitman invested in a California-based e-sports company dubbed Immortals LLC and took a seat on the board.

Her accomplishments as cited on the Forbes List include being ranked at number 151 in Forbes top 400 in 2021. She was also ranked number 3 on America's Self-Made Women 2021 list.

Although she is a member of the Republican Party, Whitman endorsed Hillary Clinton in 2016 against Donald Trump and in 2020 during the Democratic National Convention she announced that she would back Biden.

The business mogul will take over from Eric Kneedler, the chargé d’affaires ad interim for Kenya who took the wheel after former envoy Kyle McCarter (a Trump appointee) resigned following President Biden's win. 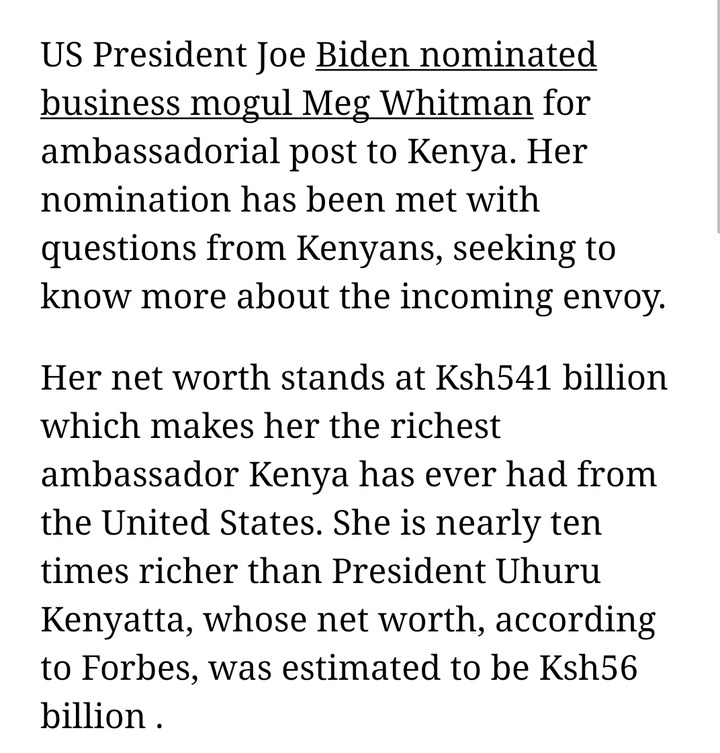 ANC PWho Have Moved With Musalia Mudavadi To Hustler Nation Of William Ruto.