By Hoseamechi (self media writer) | 3 months ago 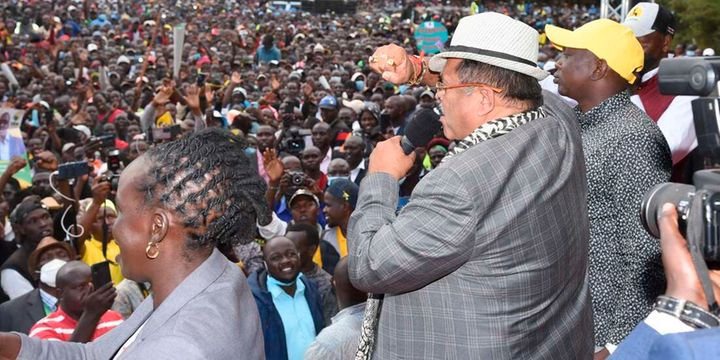 Dr. Swarup Mishra says he has no malice against Deputy President William Ruto, even though he advised voters in his constituency not to re-elect him on August 9.

Dr. Mishra asked Kesses voters on Sunday to vote for Dr. Ruto as President and him as their MP.

"Ruto and I are OK. I implore Kesses citizens to vote for me as their MP and Ruto as our President,” he declared to cheers at a CDF event.

A week ago, Dr. Ruto encouraged Kesses voters not to vote for Dr. Mishra, who is running as an independent, but for UDA candidate Julius Ruto.

The DP urged his supporters not to elect his detractors, saying they turned against him and got proud after riding his wave in 2017.

Dr. Mishra indicated over the weekend that he respects the DP as a national leader.

He stated he still considers the DP his buddy and will push for him to be elected Kenya's fifth president.

I urge Kesses citizens to elect me as their MP and Ruto as our fifth president. Mishra stated Ruto is an honorable individual with leadership qualities.

The MP has not said why he left the DP's United Democratic Alliance (UDA), only that he will back Ruto's 2022 presidential ambition.

Kenyans called the DP a dictator and a racist for his comments.

The MP urged his opponents to promote peace and tolerance during the campaign.

Kesses villagers backed the MP, striking out at the DP over his recent remarks and accused him of opposing their MP and meddling in constituency politics by pushing them against reelecting the incumbent.

Residents committed to vote for Mishra on August 8 based on his record, not his politics.

We told DP Ruto to focus on his presidential bid and stop assaulting our MP. Ruto should focus on national politics, said Kesses resident Daniel Kiplagat.

While committing to vote for Dr. Ruto as president, they said voters should choose the rest of the elective seats, including the MP's seat.

They claimed the DP must cease pressuring them to elect UDA candidates over their five-year-old MP.

We're re-electing Mishra due of his development record. Inciting Kesses residents against Mishra harms the DP. Mr Kiplagat remarked, "We'll vote for him as President, but we'll elect Mishra regardless of his party."

Residents say compelling them not to elect Mishra was counterproductive because they continued to benefit from his development projects.

Our MP assisted us through empowerment programmes for adolescents, women, and seniors. Many people will suffer if he's voted out today, said John Rono.

"Uasin Gishu politicians from other regions shouldn't tell us how to elect our leaders. Kesses inhabitants know their needs and the leaders they seek. We know our constituency better than Soy, Kapseret, Turbo, and other Uasin Gishu politicians do. Dr. Swarup Mishra will be our August 9 MP, stated Mr. Kiplagat.

The NG-CDF board evaluated the Kesses MP as one of the best in the country. He's known for providing dairy cows, food, and youth empowerment projects.

Content created and supplied by: Hoseamechi (via Opera News )

JUST IN: Government Announces On Possibilities Of Stopping Flights From Uganda After Ebola Outbreak