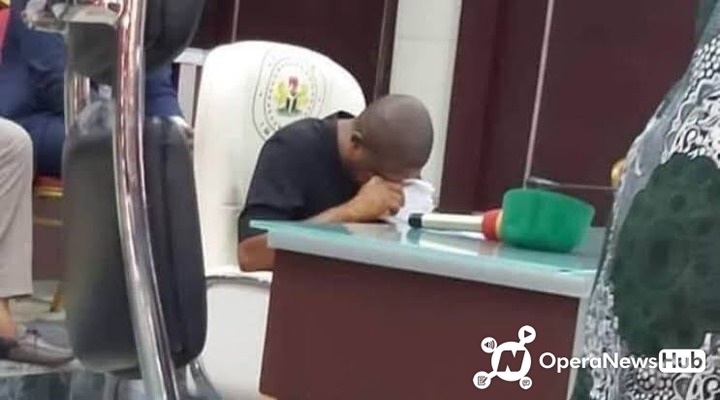 The Imo State chapter of the Peoples Democratic Party PDP speaking through the State Party Secretary Nze Ray Emeana has cleared the air on why sacked Imo governor Rt. Hon. Emeka Ihedioha CON approached the Imo State High Court seeking an appeal to restrain the State Assembly from inviting him to appear before them over the ongoing investigation of the alleged missing N19.63 billion Local Government funds.

The PDP pointed out that the Audit Report by the Auditor General of LGAs in Imo State covered the period from 1st January, 2019 to December 31, 2019 stressing that Ihedioha took over on May 29 of 2019 and not January 1st.

The PDP also noted that of the N19.63 billion in question, about N16 billion was expended between 1st of January 2019 to May 28th 2019, which were during the era of Owelle Rochas Okorocha. The PDP claimed that only the sum of about N3.7 billion that was spent by the 27 LGAs between May 29, 2019 to December 31, 2019 which was the period Ihedioha was in power.

The PDP insisted that Ihedioha should only explain what happened to N3.7billion while Rochas Okorocha should explain the balance of about N16billion.

The PDP expressed concern over what it termed kangaroo proceedings by the state Assembly over the said N19.63billion stressing that the matter which was referred to the Public Accounts Committee of the House of Assembly, did not have a single member of the PDP as a member. The PDP noted that the Minority Caucus of the PDP in the State House Of Assembly petitioned the Speaker to reconstitute the Committee and not only include PDP members but to also make a PDP member of the House the Chairman of the Committee as has been the precedent, convention and procedures in the Imo House of Assembly and the National Assembly since 1999. The PDP noted that the Speaker Rt Hon Collins Chiji had refused their application.

The PDP insisted that the condition needed for the Imo State House of Assembly to assume jurisdiction to investigate the Interim Auditor’s Report was not met.

The PDP insists that this was the reason Ihedioha had to approach the court insisting that Ihedioha wants the Court to determine whether the procedure for investigation is consistent with sections 128, 129 and even 125 of the 1999 Constitution as amended and Imo State Local Government Administration Law, Section 129 (1), that contained  the procedures for the auditing of Public Accounts of Local Governments.

The PDP insists that it is important that the Court clarifies and determines whether the composition of the Public Accounts Committee (PAC) of Imo State House of Assembly for the investigation into the matter was in line with the relevant laws, rules, conventions and procedures so as to determine whether Ihedioha would get a fair hearing.

The PDP insists that Rt. Hon. Emeka Ihedioha has no intention of stopping or evading any investigation or “probe” of the N19.63 billion Auditors Interim Report by the Imo State House of Assembly insisting that he is determined to establish that the rule of law, due process and Fair Play are applied in the entire process.

The PDP insisted that the ploy was an attempt to indict Ihedioha having failed in their media attacks at the sacked Governor.

Cross-carpeting: Top 7 politicians who have moved across APC and PDP at least 3 times

How Many Votes Does It Take to Impeach a President?