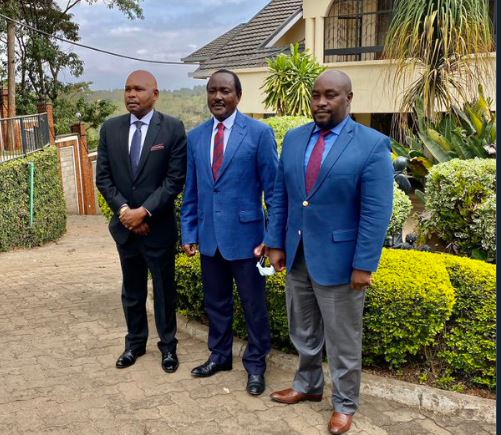 Azimio La Umoa One Kenya Coalition Party supporters have a reason to be happy after Raila Odinga's man held a meeting with Wiper Leader Kalonzo Musyoka.

Prof Makau Mutua has confirmed that on Saturday he held talks with Kalonzo and Kitu Senator Enoch Wambua.

While the Spokesperson of Raila Odinga's Presidential Campaign did not reveal many details of his meeting with Kalonzo, he noted that it was a happier meeting.

"In HAPPIER times with my brothers @skmusyoka and Senator @kiiowambua. Let’s hope “the past is prologue” [Act 2, Scene 1, The Tempest, William Shakespeare]," Prof Mutua tweeted.

Kalonzo unveiled his presidential bid after Raila Odinga did not name him as his running mate, instead, named Martha Karua.

Kalonzo was given Chief Minister position which he is yet to accept.