By Rickiee (self media writer) | 7 months ago 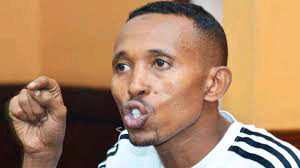 United Democratic Alliance, UDA MP Mohammed Ali of Nyali has broken his silence over the alleged circulation of information revealing that media houses have shown their backs to the UDA rallies that are happening across the country informing Kenyans of fresh news on what is happening in this century.

In the recent past, the UDA allied MPs, Senators, and other leaders have complained of the media houses not airing their rallies. They also said that the media houses have been airing the events associated with former prime minister Raila Odinga.

The legislature has told Kenyans not to worry again saying that revolution shall not be televised but rather it shall be posted, tweeted, and shared.

He further claimed that the media houses giving UDA a blackout was not a big deal since the nation is in the digital era and can get what they want. He also said the media cannot do anything with the digital world that is sharing what is or has happened in the country.

"The Revolution shall not be televised. it shall be posted, tweeted, and shared! Media giving UDA blackout is not a big deal. We are in the digital era. Digital is So Now that they can’t do anything about it. https://t.co/7N2qzzm04f," Ali Mohammed said.

UDA allied politicians had recently threatened to boycott Citizen Television asking its followers to unsubscribe from the media house for neglecting UDA rallies across the country.