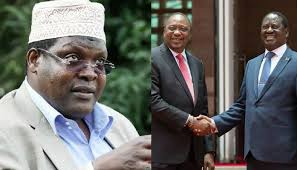 In Nakuru during the announcement of Nakuru as the fourth city of Kenya after Nairobi, Mombasa and Kisumu, President Uhuru Kenyatta was seen making a speech that was directed at supporting Raila Odinga ahead of the 2022 General elections.

Uhuru Kenyatta said that there was no hurry in campaigns as Deputy President William Ruto was going and made comments that Raila's k9ve at a slower pace was slow but also sure.

In his response, city Lawyer Miguna Miguna has responded to the smooth endorsement by stating that those were just progandaa that were being spread by fake news media.

According to Miguna Miguna, President Uhuru Kenyatta never mentioned any persons name but media channels have taken it that it was Raila Odinga who was being talked about.

"he unpopular Despot Uhuru Kenyatta did not even mention Conman Raila Odinga's name, but look at the fake news" Reads a statement from Miguna