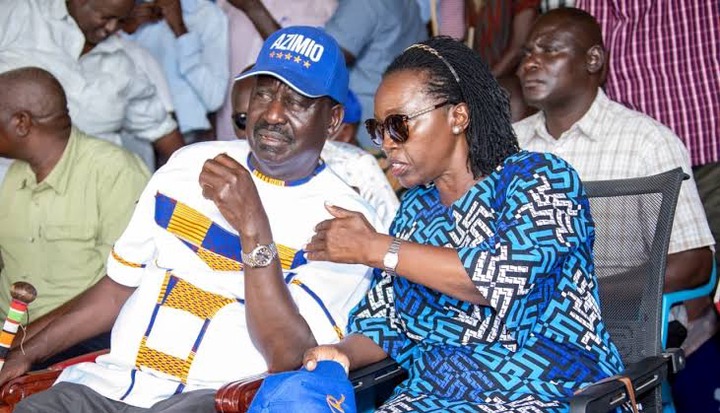 He further revealed the positions each of the Azimio principals will get once he forms government. Kakamega Governor Wickliffe Oparanya, Wiper Party leader Kalonzo Musyoka and Mombasa Governor Ali Hassan Joho were some of the beneficiaries. Raila mentioned that they will occupy critical departments in the two arms of government (minus the judiciary).

"I nominated a core team to help me run the Azimio government. I have nominated Kalonzo Musyoka as the Chief Cabinet Secretary with the responsibility to coordinate and supervise functions of the government," he said.

"For the third arm of government, I nominate Kenneth Marende as the Speaker of the Senate. I further nominate Hon Wickliffe Oparanya as the cabinet secretary for the Treasury. I nominate Peter Munya as the cabinet secretary for agriculture and chairman of Kenya's production sector and Ali Hassan Joho as minister for lands to deal with the historical land injustices at the coast," he added.

"I set up a seven-member committee to help advise and recommend to me the best candidate for the deputy presidential ticket.

After much consultations, we have found a suitable person to be the Joshua of this country. And this person has to be a woman. I I am persuaded she has the right pair of hands to lead this country. I have the great honour to announce my running mate and cabinet secretary for justice and constitutional affairs, Martha Wangari Karua," he said as the crowd broke into cheers.