ODM Complains of Harrassment By Jubilee Officials In Bonchari By-election

By RealGithiri (self meida writer) | 27 days 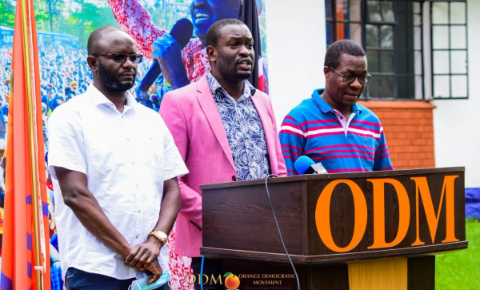 The Orange Democratic Party ODM is currently fighting through thick and thin to retain the Bonchari seat. The seat that was left vacant by the sudden dimise of MP Oroo has attracted political heavyweights who seek to have a grasp of the Kisii region. Throughout the campaigns ODM party claimed to be harrassed by Jubilee party where the rulling party user police to disrupt ODM and UDA campaign trails in the region.

However as the voters of Bonchari constituency vote to elect their new leader, ODM has cried foul by Jubilee party whom have decided to distabilise ODMs network in the region. Through their official social media platforms, ODM have exposed allegations of voter bribery and intimidation by Jubilee through the use of police. 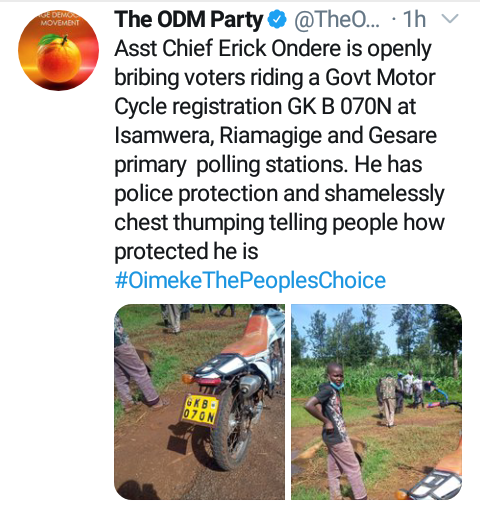 ODM has even exposed a local chief in Bonchari who has been seen bribing voters in the region. For ODM the Bonchari seat is a do or die since they enjoy massive support from the region. ODM party reported that their secretary general Edwin Sifuna and Kisii MP Janet Ongwae have been playing cat and mouse game with the police who have been trailing them in the region.

They however reported that Jubilee legistlators were enjoying protection from police as they hovered around different polling stations. 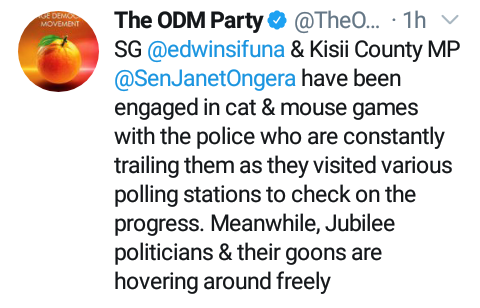