There is a peculiar political event happening in waiting come 2022 general elections. This happening I believe in my honest opinion has got no specific solution. There are political things and scenarios that even the most prominent and experienced politician can never ever change since it's beyond his control or he may have done a big mistake in the past that acting to not favour his present or future success and good intentions politically.

There is the Rift Valley factor which tends not be in favour of a certain major presidential candidate. This candidate in reference is Raila Amolo Odinga.

Before 2002 Raila happened to be in favour and support of the former(late) Daniel Arap Moi and his KANU party. This President originated from Rift Valley's Kabarnet area. In the 2002 general elections RAO shifted political grounds to be in favour of Moi's opponent called Emilio Mwai Kibaki. RAO marketed the political ambitions of Kibaki by the slogan 'Kibaki Tosha' leading to massive Kenyan voters support for a Kibaki Presidency.

Raila actions had a betrayal effect to the Moi's and Rift Valley regions' dwellers who felt bad for the shifting of the presidency post. It's human and logical that the effect of this key action should culminate to resentfulness, dissatisfaction and regret leading to the rise of protest voters.

The end game of Raila's previous and contrary political action will mark the rebirth of protest votes scenario. The massive number of voters in this vote rich zone will deliberately vote against Raila for Presidency,RAO if lucky will get less than 30% votes from this region.

The logic here is that the region will unanimously vote for the other major presidential candidate with the hope of getting back the Presidency. They perceive that they can get it once more for even atleast a last time through the help of their brother William Ruto. 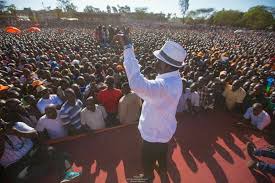 The region is unlikely to betray their brothers presidential bid in support of others who are his opponents.

Just in; 2 Bodaboda Riders Confirmed Dead after Being Hit By Prominent Leader's Vehicle

DCI recognized as International Organization. It is Tasked to do the following Abroad